The 62-year old Luis Alberto Ascanio Blanco, alias "Parmenides," was captured on January 10 at Bogota's El Dorado Airport in a joint operation by Colombia's Criminal Investigation Department (DIJIN) and Interpol. He is accused of being the principal link between Colombia's dominant criminal group, the Urabeños, and Mexico's Gulf Cartel, reported Europa Press. 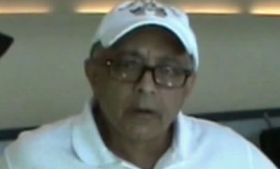 According to El Colombiano, Ascanio had been identified as one of the primary importers of cocaine into Mexico, for which he was indicted and singled out for extradition by a US court order. (A search through the US federal court database, however, turned up an old indictment that was sealed on a case that appeared to be closed; US officials did not return repeated efforts to clarify Ascanio's current judicial status in the United States.)

While there have been reports of a direct presence from Mexican cartels in Colombia -- especially the Sinaloa Cartel -- Ascanio is an example of the little reported brokers that connect criminal groups in different countries and are key facilitators of the transnational drug trade. Ascanio is accused of running a powerful and well-connected network; a notion supported by his alleged links to major criminal groups in Colombia and Mexico.

His activities also highlight how the Urabeños appear to be supplying drugs to all sides of the conflict in Mexico, with the group previously linked to supplying the Gulf Cartel's principal rival, the Zetas. That he had a base of operation in the Dominican Republic is also significant, with the country at the heart of ashift towards Caribbean trafficking routes.

By Charles Parkinson, used with permission of InSight Crime