OCCRP reporter Khadija Ismayilova being arrested at a protest in Baku

OCCRP investigative journalist Khadija Ismayilova was detained today while protesting in Azerbaijan's capital of Baku. Among hundreds of protesters, Ismayilova was one of some 40 arrested, who also included bloggers Emin Milli and Bakhtiyar Hajiyev, as well as human rights defender Malahat Nasibova.

Ismayilova was released after several hours and charged a fine of approximately $550.  Ismayilova said, despite an aggressive arrest, she was treated well by the authorities although she was denied access to her lawyer and assigned a state lawyer.  Ismayilova said she will appeal her fine.

The crowd in Baku had gathered to protest the use of force against demonstrators in the central Azerbaijani city of Ismayilli, which was the scene of several protests last week. In Ismayilli, police used tear gas and water cannon to disperse the crowd, which was demanding the resignation of the local governor, Nizami Alekberov, and the release of dozens of men who have been arrested during the rioting, according to Radio Free Europe/Radio Liberty.

Witnesses at Saturday’s protest caught the arrest in a video, which shows Ismayilova being dragged at a run away from the scene by police. 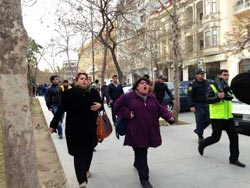 Ismayilova joined hundreds of protesters in Baku on Saturday.

Before her release, police spokesperson Ehsan Zahidov told OCCRP that Ismayilova was in police custody, being treated well, and would be released soon, after “interrogation.”

The Human Rights Foundation condemned the arrests in a release Saturday, calling on the authorities to “stop attacks and harassment against human rights defenders.”

“By arresting within a crowd of protesters also these prominent human rights defenders, Azerbaijan authorities show that they use detention as a tool to punish critical voices,” the Human Rights Foundation said in its release.

Ismayilova is an internationally respected journalist who was named this years “Courage in Journalism” award winner by the International Women's Media Foundation along with several other prizes.  She serves on the board of directors of OCCRP as a representative of the member centers.