A Swedish court cleared on Wednesday Swedbank’s former CEO Birgitte Bonnesen of playing down the bank’s inadequate prevention of massive money-laundering through its operations in the Baltic states. 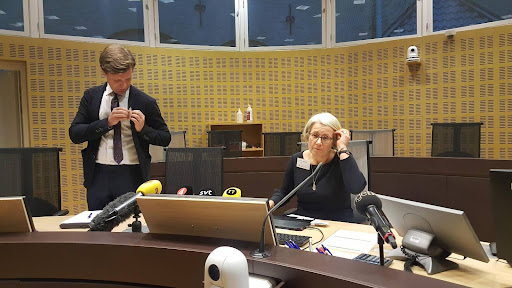 Chief Judge Malou Lindblom speaks with reporters following the verdict delivery. (Photo: Ola Westerberg, OCCRP)In the highly unusual case, Bonnesen was charged with aggravated fraud for knowing about the problem but publicly denying it in statements in late 2018 and early 2019.

The prosecutors had urged a two-year prison penalty for Bonnesen but the Stockholm District Court dismissed the charges after a lengthy trial.

While some of Bonnesen’s statements were “unclear and incomplete regarding the bank’s anti-money-laundering work,” she spoke in “general terms” and was “to a large extent correct,” the court concluded. “In any case, the CEO did not claim that Swedbank did not have any problems at all.”

”To be sentenced for fraud, it is not enough to make inaccurate claims or omit important information, it has to be misleading” and have a “certain concretion and precision,” Chief Judge Malou Lindblom told reporters after the verdict was pronounced.

There have been very few earlier cases for the court to lean on, Co-Judge Carl Rosenmüller added.

“Normally, statements found to be fraudulent in previous cases have had a criminal plan attached to it,” he added. That was not the case with Bonnesen, the court argued.

”Birgitte Bonnesen is happy and relieved from being acquitted,” defense lawyer Per E. Samuelsson wrote in a statement to OCCRP. “I have been fully convinced all the time that she is innocent and I am pleased that the district court has reached the same conclusion.”

Chief Prosecutor Thomas Langrot told reporters he was disappointed that the court had not reached the same conclusion as the investigators did.

“In sum, we put more emphasis than the court on the importance of what she said and what she didn’t say when assessing if her statements were misleading. We think one must focus on the perspective of the misled, the investors and the market,” he added, referring to investors who lost money when the Swedbank share fell on the stock exchange.

Langrot added that the prosecutors would have to read the verdict carefully before deciding on whether they would appeal.

While not assessing the court’s verdict, internationally renowned anti-money-laundering expert Graham Barrow said the case ”highlights that proving ‘beyond a reasonable doubt’ tends to be held to a higher standard when it's a ‘professional person’ working in a reputable organization, rather than someone who rubs shoulders with crooks and the crime involves violence or something similar. The ability to suspend disbelief is just that much harder when it comes to ‘white-collar’ crime.”

The Swedbank case has several parallels to that of Danske Bank in Denmark. In late 2018 it was revealed that possible large-scale money-laundering had occurred via the Danish bank’s operations in the same region. In connection with the competitor’s scandal, Bonnesen repeatedly denied that Swedbank had the same problems.

In 2020, Swedbank received a record US$400-million fine from Finansinspektionen, Sweden’s financial supervisory authority, due to ”major deficiencies in its work to combat money laundering in its Baltic operations.”

So-called high-risk clients sent more than $40 billion through Swedbank between 2014 and 2019, a law firm concluded in 2020 in a report commissioned by the bank’s new board.

Some clients were Russian oligarchs, and some money flowing through the bank could be traced to companies tied to the infamous Magnitsky fraud in Russia.

Swedbank is also being probed by U.S. and Estonian authorities over its operations in the Baltics. The bank, which has a whole new management and board, says it cooperates fully with the investigations.

Swedbank's spokeswoman Unni Jerndal wrote to OCCRP that the bank noted that Bonnesen had been acquitted. "At the same time, Swedbank is not a part of this court process, it is entirely about the bank's former CEO," she said.

The bank has previously pointed out that it has dealt with its historical shortcomings regarding anti-money-laundering.