Kyrgyz authorities asked a court on Monday to permanently ban Radio Azattyk, the Kyrgyz service of Radio Free Europe/Radio Liberty, from the country because the outlet’s description of the Kyrgyz-Tajik conflict is not in line with the government’s narrative. 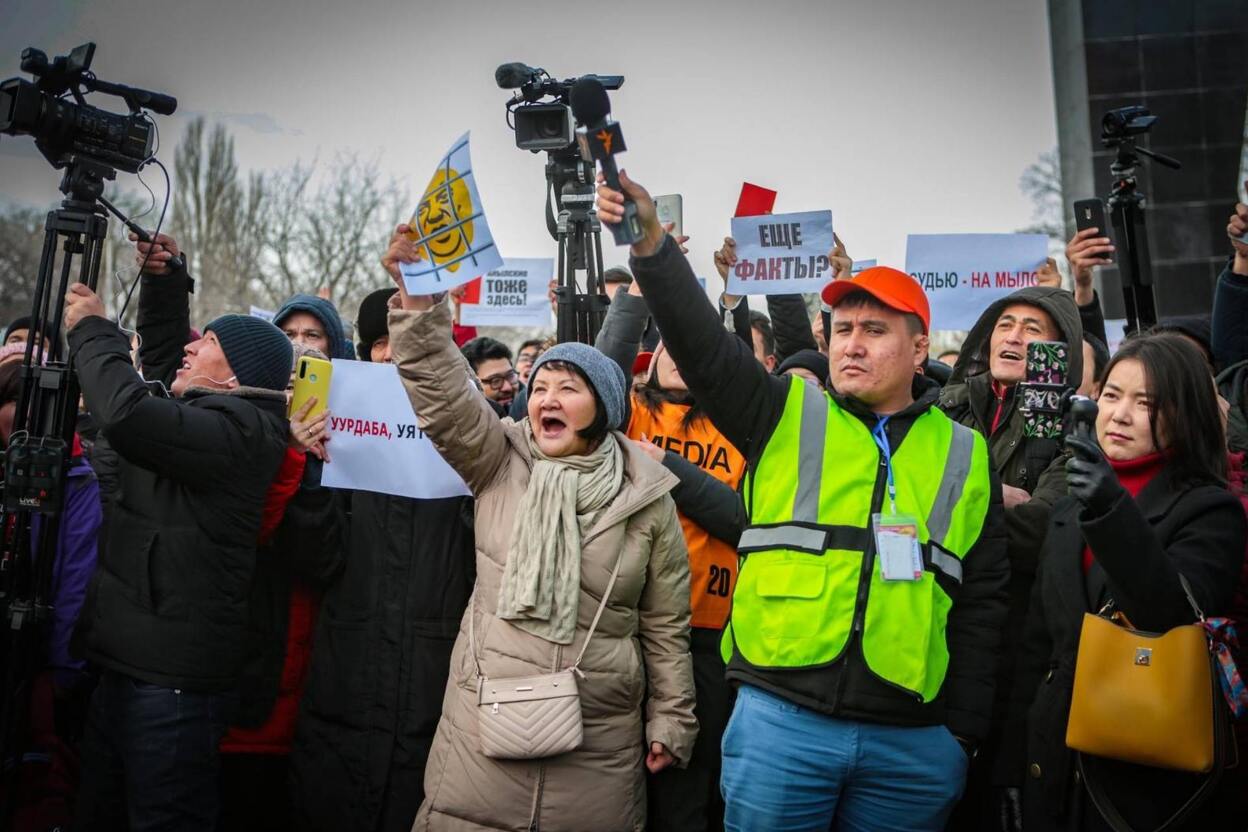 A Radio Azattyk reporter covers a protest against corruption in the Kyrgyz customs service in Bishkek in December 2019. (Photo: Gulzhan Turdubayeva/Radio Azattyk)Experts see the move against a widely respected outlet as another step toward autocracy made by the new government of a country once described as a Central Asian “island of freedom.”

Kyrgyzstan’s Ministry of Culture, Information and Sport, which submitted the request to the court, explained that Radio Azattyk refused to delete a video report about last September’s conflict on the Kyrgyz-Tajik border which the government of Kyrgyzstan claimed contained false information.

Last October, the government temporarily suspended the work of Radio Azattyk, blocking access to its website in the country and its bank accounts. In December the ban was prolonged.

RFE/RL’s president, Jamie Fly, denied all claims of inaccuracy in Radio Azattyk’s reporting and promised to challenge the Kyrgyz government’s decision in court.

Dozens of activists, politicians, and civil society leaders asked Kyrgyz authorities in an open letter to lift the October ban as it was a political decision, but never heard back. The presidential office denied the political basis of the ban.

Kyrgyzstan was previously recognized by human rights group Freedom House  as a “partly free” country. But in recent years, after the third revolution in less than two decades, the new government started its shift toward autocracy.

Last year, the authorities launched a campaign against journalist Bolot Temirov and his outlet, “Temirov Live,” that bore clear signs of political motivation. In November, the journalist was stripped of his Kyrgyz citizenship and deported to Russia.

In late fall, Kyrgyzstan arrested more than 20 politicians, activists, and human rights activists, accusing them of attempting a coup.

“Aggression, censorship, paid supporters and trolls, death threats, and sending opponents to prison — these are not the methods of real statesmen. It is the path of dictators. And they usually end badly,” media specialist Elmira Toktogulova told Kloop, an OCCRP partner.