Investigators from several European countries have traveled to Lebanon to advance their probes into the country’s Central Bank Governor, Riad Salame, accused of embezzlement and money laundering abroad and at home, OCCRP’s local partner Daraj reported. 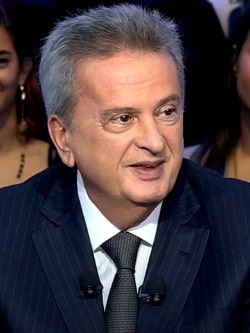 Lebanon’s central bank governor, Riad Salame, is under investigation in several European countries relating to alleged embezzlement and money laundering. (Photo: MTV Lebanon/Youtube, Wikimedia, License)A European source close to the visiting delegation, which is seeking witnesses and reviewing bank records in Beirut, told Daraj that Salame’s trial will take place in the coming weeks or months at most.

“2023 is the year in which Salame’s trial will start,” the source requesting anonymity said, adding that “Salame will not be tried in Beirut, this is almost a settled matter. It may be a trial in absentia if he refuses to comply, but he will not be able to avoid being tried in Europe. It is a very important moment.”

Salame, who has sat at the head of the central bank since 1993, is the subject of financial crime probes in Liechtenstein, Luxembourg, Germany, France and Switzerland.

In August 2020, OCCRP and Daraj uncovered the extent of Salame’s offshore activity; identifying companies in the BVI, Liechtenstein, Panama, Malta, Belgium, Germany, and Luxembourg, as well as luxury property in the U.K..

A second joint OCCRP-Daraj investigation uncovered how a company tied to Salame bought a stake in his son’s company, then sold it to Bank Audi, a major Lebanese bank that he regulates.

Louay Ghandour, President of the Lebanese Anti-Corruption Task Force, said he believed the European states who sent their officials and judges to Beirut in connection with ongoing investigations are going to try Salame.

But the motive for these trials, he told OCCRP, was not to help seize the stolen and laundered money, but to confiscate the illicit funds for the benefit of their national treasuries.

“Lebanon and its people can only benefit from this effort if Lebanon partakes in the trials,” he added.