The strongman who ruled Azerbaijan’s remote region of Nakhchivan with an iron fist for the past 27 years resigned abruptly on Wednesday, marking the end of his autocratic and often brutal rule over the secretive exclave. 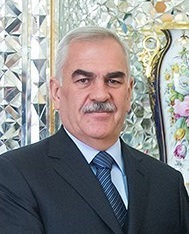 Vasif Talibov (Photo: Mohammad Hassanzadeh/Tasnim News Agency, Wikimedia, License)Taking many in Nakhchivan by surprise, Vasif Talibov, 62, wrote in a letter to the region’s top legislative body, the Supreme Assembly, that he would step down for health reasons, effective immediately.

The shock resignation comes amid a major crackdown on corruption in the republic that began in November and has already taken down some of Talibov’s top officials, including the region’s finance minister and senior customs officer.

A human rights activist and commentator from Nakchivan told OCCRP it had become clear that Talibov had fallen out of favor with the government in Baku, which is led by autocratic President Ilham Aliyev. The Aliyev family was once closely allied with the Talibovs, but in recent weeks a steady drumbeat of headlines in pro-government media outlets had criticized him for the vast wealth he had accrued during his years in power.

The activist, who cannot be named for safety reasons, said there were already reports on social media that Nakchivanis were gathering outside Talibov’s house to protest his regime, and it seemed possible the leader would be brought to Baku for his own safety.

“Maybe he really resigned [of his own volition], but he will [still] be taken from Nakhchivan because there is so much [desire for] revenge against him,” he said.

Nakhchivan has been referred to as “Azerbaijan’s North Korea.” It is separated from the country by a corridor of land belonging to Armenia, and Talibov had been given free reign to rule the region — an opportunity he has seized, often capriciously. He has reportedly banned citizens from hanging laundry on balconies, and women working in the public sector from dying their hair blonde, among other edicts.

“It’s a really weird political system,” the human rights activist from Nakchivan said. “Talibov was acting as sultan and … it was his personal fiefdom.” He said tensions had apparently arisen between the government in Baku and Talibov, in part because of the latter’s fierce protection of the region’s autonomy. In one widely reported sign of this tension, Talibov allegedly controlled whether government officials from Baku could enter the region.

Because it is so remote, Nakchivan rarely makes international headlines, but earlier this year OCCRP revealed how the Talibov family had amassed a fortune during their time in power. Although Vasif Talibov earned an official salary of just $26,000 per year, and his children also have low-paying government jobs, reporters found they had snapped up an estimated $63 million worth of properties in Georgia and Dubai, and received more than $20 million in suspicious wire transfers.

Commenting on the arrest to the pro-government online newspaper “Yeni Musavat,” Azerbaijani MP Siyavush Novruzov, a member of the ruling party, said that “everything depends on the will of one person,” implying that President Aliyev had personally ordered Talibov’s removal.

“Now it is possible that an authorized representative of the president will be appointed to Nakhchivan, or someone else will be appointed, or the chairman will be elected. It depends only on him [Aliyev,]” he said.

Contacted by local reporters for comment, Talibov’s 40-year-old son, Rza, said he had nothing to say about his father.

“I live in Baku, and am doing my own work,” said Rza, who is an official in Azerbaijan’s State Migration Service. “I haven’t talked to him, and have no information.”

But on social media, many in Azerbaijan had a lot to say about the resignation.

“Dear Nakchivan, you are now free!” said one.

“A new era begins in Nakhchivan,” another said.