The Prosecutor General’s office in Russia Tuesday formally labeled the Russian branch of the Lithuania-based Riddle Analytical Center as an “undesirable” organization, saying it was “posing a threat to the security” of the Russian Federation. 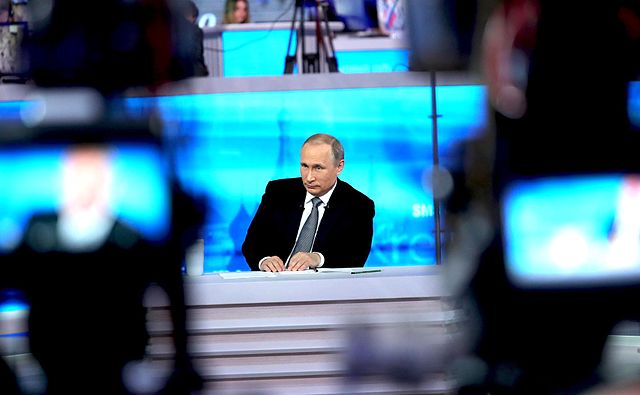 The Kremlin further strengthen measures against foreign NGOs, media in Russia. (Photo: President of Russia, License)The prosecutor also said that the decision was made in response to a request from the Russian Justice Ministry to add the center and its media outlet to a list of foreign and international non-governmental organizations (NGOs) whose activities are recognized as undesirable on the Russian Federation territory.

Under the law, passed in 2015,  any international NGO can be labeled “undesirable” if it “endangers the constitutional order of the Russian Federation, the country’s defense capability, or state security,” and anyone found to have collaborated with such an organization could face a hefty fine or even incarceration.

The decision came less than a week after a commission of the Russian national parliament – the State Duma – completed its investigation into “30 foreign NGOs and other structures” from 16 states it called “unfriendly.”

Vasily Piskarev, head of the commission, said on Nov. 23 that activities of some NGOs from Australia, Austria, the U.S., Hungary, Denmark, Spain, Latvia, Lithuania, Luxembourg, the Netherlands, Norway, Poland, Germany, Montenegro, the Czech Republic and Sweden, will be declared as undesirable or extremist.

“All these structures are controlled by the governments of the NATO states and are designed to undermine our country from inside,” according to Piskarev.

He claimed that the NGOs were tasked with inciting unrest and separatism in Russia, meddling in elections and pushing drugs, enrolling youngsters in hazardous actions, and discrediting Russia using various technologies.

Anti-Russian actions, he said, have increased since February, when Russia attacked Ukraine in what the Kremlin calls a “Special Military Operation.”

More than 60 organizations, including OCCRP and a number of other media outlets dedicated to exposing fraud and corruption in Russia, have been labeled “undesirable” or declared “foreign agents” by the Moscow regime so far and the Kremlin apparently has no plans to slow down.

On the contrary, the amendments that Russian President Vladimir Putin approved in July to modify Russia’s 2012 Foreign Agent Law, which has been routinely utilized to persecute opponents of the government, are set to take effect Dec. 1, according to the U.K. Ministry of Defence.

The 2012 law defined “foreign agents” as persons or organizations that have received financial backing from outside sources.

The latest U.K. Defence Ministry’s intelligence warned that the Russian Justice Ministry will now be able to “publish the personal details and addresses of designated ‘foreign agents’, almost certainly placing them at risk of harassment,” and that the amendments “will further extend the repressive powers available to the Russian state.”

According to the ministry, this continues a trend that began when Putin reclaimed the presidency in 2012, but has escalated significantly since the Russian invasion of Ukraine.