Spanish police arrested 16 people Thursday connected to the theft of 58 tonnes of copper cable on behalf of a larger criminal organization. 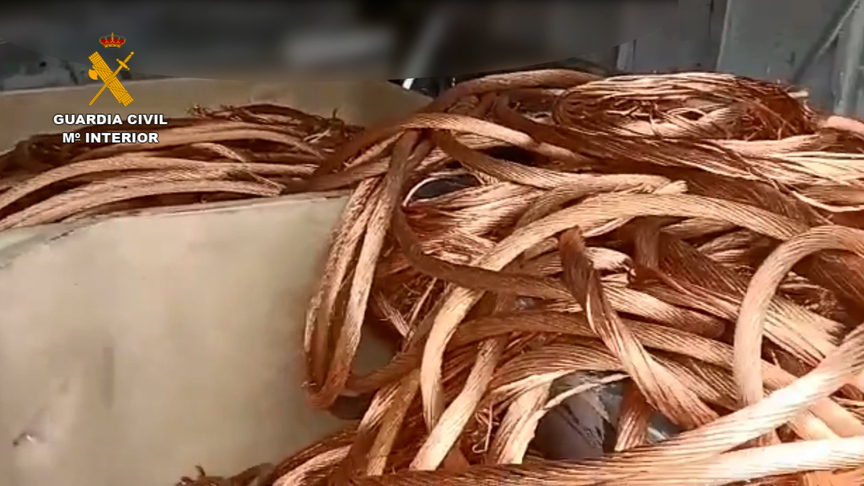 Spanish police have linked 16 people to a criminal organization behind the theft of 58 tonnes of copper cable. (Photo: Guardia Civil, License)Civil Guard investigators claim the suspects’ operation involved the use of false invoices and the financial information of a deceased individual to pass off their possession of the stolen copper as legitimate.

Police identified several wastewater treatment plants as the sites from where the cables were stolen, as well as multiple scrap metal yards where they were potentially pawned off.

Copper is an excellent conductor and an incredibly valuable commodity used in multiple applications such as power generation, transmission, and telecommunications. Its tensile strength, the force required to pull a structural object to its breaking point, is double that of aluminum, which is why it is also extensively used in the building industry.

Police agencies across Spain became aware of the suspect’s activities early this year when, around the same time, multiple wastewater treatment plants across the country reported the theft of copper cables from their sites.

To give a sense of scale to the criminal operation, 58 tonnes of copper cable, when laid out, spans over 19 kilometers long.

Authorities thus began inspecting scrap yards and metal waste management centers to investigate if the suspects were using them to pawn off their stolen goods.

Soon after, Civil Guard agents located the getaway vehicle used in some of the robberies. After they connected the vehicle to its driver, police learned that this person was in regular contact with 10 other individuals who lived well beyond their means.

Investigators soon established that the suspects made as many as three trips a week to waste centers and industrial sites all over the country, making their criminal operation national in scope.

The alleged thieves then returned to Madrid empty-handed, having first stashed the copper cable across multiple secure sites. They would return later with rented vans to retrieve their stolen goods, police said.

Once secure, authorities said the suspects sold the cables to junkyards; false invoices and the financial data of deceased individuals were used to mask their illegitimate possession of the copper.

Police eventually arrested six of the suspects in the towns of Santa Amalia and Mérida. Inside the two vans, police discovered eight tonnes of copper cable previously reported stolen.

Upon learning that a delivery was about to be made at a junkyard in La Cañada Real, the Civil Guard moved in and arrested the other ten suspects. Five other individuals currently remain under investigation.

Police have so far accounted for 12 of the 58 tonnes of copper cable reported stolen across seven provinces in Spain. The alleged thieves are also suspected of engaging in drug trafficking, authorities said.