An American rancher was sentenced Tuesday to 11 years in prison for defrauding two meat processing companies of over US$244 million by raising 265,000 bovines for them that never in fact existed. 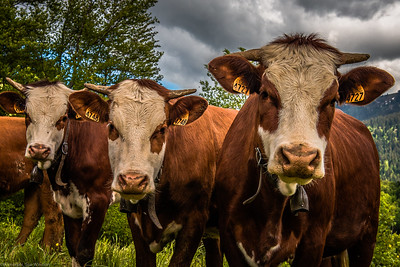 In one of the largest fraud cases in Washington history, Cody Easterday scammed two meat processing companies of over US$244 million by raising 265,000 bovines for them that never in fact existed. (Photo: Winniepix, Flickr, License)Cody Allen Easterday, 51, pleaded guilty back in March to orchestrating a “ghost cattle” scam that defrauded Tyson Foods Inc. and another company out of nearly a quarter of a billion dollars, in what the U.S. Department of Justice (DOJ) has called the largest ever fraud scheme in the eastern district of Washington.

At his sentencing, Chief Judge Bastian remarked that the case constituted “the biggest theft or fraud I’ve seen in my career – and the biggest I ever hope to see.” Bastian further denounced Easterday for destroying the very empire he had dedicated his life to.

According to court documents, Easterday originally agreed to purchase and feed cattle on behalf of the two companies, whereby they provided advanced payments to fund the operation.

Upon selling the cattle, his business, Easterday Ranches, would reimburse the initial payments, plus interest, but keep whatever profits remained from the sale price.

Between 2016 and 2020, however, Easterday defrauded the two companies by falsely claiming to have purchased, raised, and fed 265,000 bovines for future sale, when in fact they never existed. Altogether, this “ghost cattle” scam illicitly brought in over US$244 million for his business.

The money raised was used to cover roughly $200 million in losses Easterday Ranches had accumulated via poor commodity futures trading, wherein he agreed to trade commodities at a specified price at a predetermined future date.

In connection with the scam, he also defrauded CME Group Inc., which operates the world’s largest financial derivatives exchange, by submitting false paperwork on the non-existent cattle, according to the DOJ.

After illicitly paying off his losses, Easterday kept the remainder of the $244 million for himself and his business, which he built into a farming empire. By 2020, he had accumulated over 22,000 acres of farmland, hired 150 employees, and reported revenues of over $250 million.

He even purchased with his ill-gotten gains a private plane and a hangar to go with it.

“No one is above the law. Mr. Easterday amassed significant personal wealth, yet, he wanted more, so he defrauded his victims of nearly a quarter billion dollars by charging for cattle that never existed,” said U.S. Attorney Vanessa R. Waldref.

Donovan noted that the money Easterday stole would have funded the combined judicial and emergency services of a city of 100,000 people for well over four years. “Mr. Easterday’s greed destroyed his family’s farming empire and harmed innocent victims,” he said.

Once Easterday’s fraud was brought to light, he was forced to declare bankruptcy on the empire he had built on sand, or in this case cow dung. All of his assets were liquidated in what culminated as one of the largest bankruptcy cases in Washington history.

The companies he defrauded could only recoup $65 million of the nearly quarter of a billion dollars they had lost in the ghost cattle scam.

Chief Judge Bastian also ordered Easterday to pay back the full $244 million, in addition to serving his 11 year prison sentence.