Venezuela captured the protagonist of one of the United States’ most infamous corruption scandals after he fled the United States weeks before his sentencing for allegedly having defrauded the U.S. Navy of nearly US$35 million. 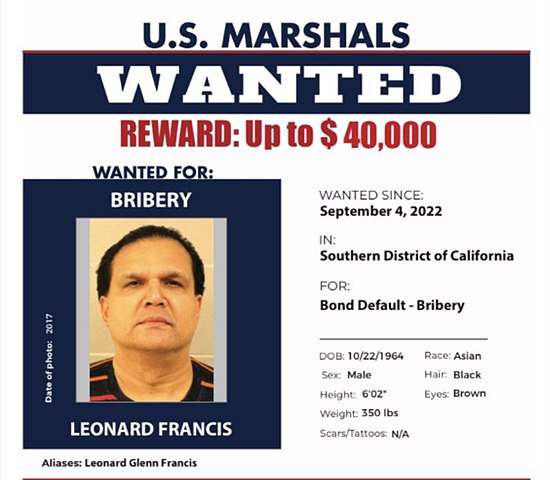 Leonard Francis, aka Fat Leonard. (Photo: U.S. Marshal's Service photographer, Wikimedia, License)Leonard Glenn Francis, or “Fat Leonard,” disappeared from his home in San Diego beginning of September after he allegedly cut off his GPS ankle bracelet. The U.S. agency in charge of monitoring was alerted that the device has been tampered with. Officers raided his residence but only found the ankle monitor.

The U.S. issued a red notice and about three weeks later, Interpol officials spotted the Malaysian defense contractor at the Simón Bolívar International Airport outside Caracas trying to fly to Russia. Carlos Gárate Rondón, the director of Interpol in Venezuela, said on his Instagram account that Fat Leonard had passed through Mexico and Cuba before entering the country. The U.S. authorities are now awaiting his extradition.

Francis was the mastermind behind an extensive bribery scheme operated through his Singapore-based company, Glenn Defense Marine Asia, which provided port services to the U.S. Navy’s ships in the Pacific Ocean.

In 2015, Fat Leonard pledged guilty of bribing dozens of Navy officials with luxury travels, elaborate dinners and prostitutes in exchange for contracts to service and resupply Navy ships and submarines throughout the Pacific Ocean. His company overcharged the Navy by at least $35 million for servicing its vessels.

Prosecutors said that Francis once took a captain, a colonel, a chief warrant officer and other four individuals out for dinner in Singapore. The bill showed they enjoyed foie gras terrine, duck leg confit, ox-tail soup, and roasted Chilean sea bass, paired with expensive wine and champagne, followed by digestifs and cigars such as $2,000 bottles of Paradis Extra cognac, and $2,000 boxes of Cohiba cigars.

Several times Francis entertained officials with prostitutes. In one example, during a Navy port visit to Manila in May 2008, five of the officers attended a multi-day party “with a rotating carousel of prostitutes,” at the Shangri-La Hotel, and allegedly drank hotel’s entire supply of Dom Pérignon champagne. Francis covered all expenses, exceeding $50,000.