Money laundering for organized criminal activity rose in Israel 12.2% over the course of 2021 compared to 2020, according to a new report by the Jewish state’s Authority for the Prohibition of Money Laundering and Terrorist Financing. 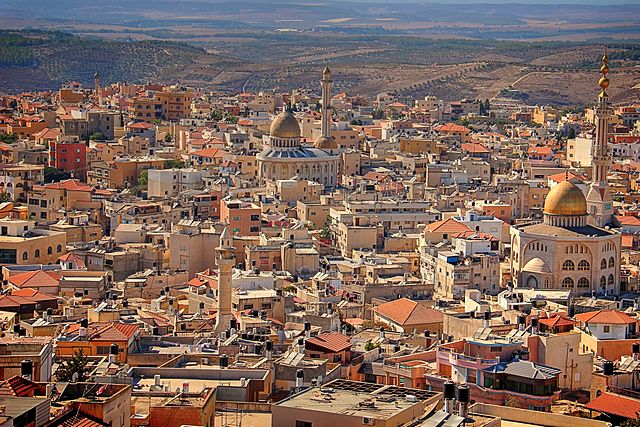 Umm Al Fahm, one of the largest Arab majority cities in northern Israel, has been struggling with the plague of organized crime for decades. (Photo: Moataz Tawfek Egbaria, Wikimedia, License)In total, money laundering on behalf organized criminal groups amounted to 19% of all cases reviewed by the authority in 2021, while those related to financing terorrism were 14.6%.

“Money laundering and financial crime are illegal phenomena with deep social consequences and risk the integrity of Israel's economy,” said the country’s Justice Minister, Gidon Sa’ar in the report. “In a reality where the criminal activity is getting more and more sophisticated, where the  technologies and techniques of money laundering and terrorist financing are also more sophisticated, high-quality and accurate financial intelligence is of crucial importance.”

Of criminal activity documented in the report, the largest portion, 17.8%, was affiliated with international organizations.

Among the cases the authority dealt with was a security firm turned criminal outfit extorting construction sites into paying for it’s non existent services.

“Its owners blackmailed contractors and large construction companies all over the country, using the criminal reputations of themselves and of others,” the report said. “In practice, the security company did not employ guards and, for the most part, guards were not even stationed at the sites.”

However, it created a web of subsidiary companies to launder the proceeds of it’s extortion. The financial irregularities ultimately brought the attention of the authority and Israel’s police force who ultimately investigated and brought down the group.

The report comes after a year in which a record wave of organized crime has disproportionately affected Israel’s Arab minority who account for about a 5th of the country.

Last year 128 Arab citizens of Israel were killed in incidents related to organized crime and by August this year, 65 had been killed according to Haaretz.

“Criminal enforcement, as well as other activities in various fields against crime and violence in the Arab sector has risen to the top of the national priorities in recent years,” said the report. “Crime and violence among the Arab society is a threat to the quality of life of its citizens and has an essential impact on order in the public sphere and local government institutions.”

However, according to the Aman Center, an NGO that tracks violence and crime in Israeli Arab communities, the government has been as much a driver of the problem as it’s solution.

“The Israeli policy makers’ abundance and ignorance of the Arab minority for decades have resulted in severe poverty, unemployment and criminality levels,” the group  says on its website. “This official Israeli authorities’ negligence policy, along with some social structural changes that the Arab minority has undergone over the past years, had resulted in a high and an alarming rise in the criminality and violence rates within this minority.”

The problem has reached such a state that Hanin Majadli, a female Arab journalist in Israel appealed directly to the criminals in an op-ed in Haaretz last week.

“Much has already been written and is yet to be written about the police’s deliberate haplessness and lack of interest in genuinely and thoroughly addressing the issue of crime in the Arab community,” Majadli wrote.

“In the meantime, until they find an effective way to solve the problem of organized crime, with no solution or effective methods on the horizon, the question arises: what else can Palestinian society in Israel do but make a direct appeal to the organized crime groups and the criminals who operate independently: Women, children and innocent bystanders are off-limits. So many of their disputes are over honor and ego, but there is no honor in murdering innocent people,” she wrote.

That said, the Arab minority is not the only place organized criminality has plagued Israeli society.

Earlier this summer, Yitzhak “Itzik” Abergil, the leader of an Israeli and ethnically Jewish criminal group which ruled the Tel Aviv underground for years, was given three life sentences for his role in the deaths of three bystanders who were collateral damage during an attempted mob hit against one of his foes.