An Israeli court sentenced Yitzhak “Itzik” Abergil, the don of the so-called Abergil crime family in Tel Aviv, to three life times and another 15 years in prison for drug trafficking and murder. 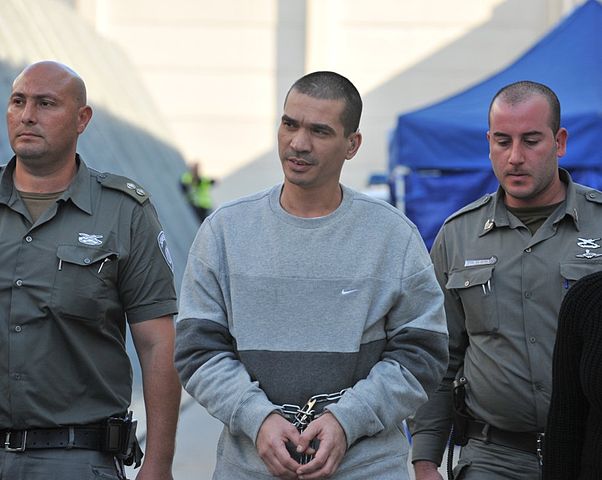 Abergil ran a criminal empire that stretched from the winding alleyways of Jerusalem to the freeways of Los Angeles. (Photo: Israel Police, Wikimedia, License)The sentencing comes half a year after Abergil was found guilty of participating in the killing of three innocent civilians in 2003, when a bomb exploded on Tel Aviv’s Yehuda Ha-Levi Street.

The deaths were believed to be collateral damage in an attack on his gangland rival, mob boss Ze’ev Rosenstein. As leader of the organization, the courts found Abergil liable for the attempted hit.

The two had a vendetta after the assassination of Abergil’s older brother Ya’akov, the founder of their gang, allegedly on Rosenstein’s orders. In addition, Abergil was convicted of leading a criminal organization.

The case, known in Israel as “Case 512” stretched on for six years and has become known as the largest criminal case in Israeli history. Over the course of the trial, the defendants had to be kept behind bullet proof glass for their own safety in a specially designed courtroom, the Israeli news site, Ynet reported.

Abergil ran a criminal empire that stretched from the winding alleyways of Jerusalem to the freeways of Los Angeles, with bodies left in his wake on both continents. His organization dealt in ecstasy, ran casinos, laundered money, engaged in extortion and other crimes was one of Israel’s top six organized crime groups and one of the 40 top drug importers to the U.S.

In addition to Rosenstein, Abergil had also feuded with other major figures in the Israel underworld, such as Ya’akov Alperon. In 2008, Alperon had reportedly ordered an attack on Abergil. Before the end of that year, Alperon would be killed by a car bomb on Tel Aviv’s Yehuda Ha-Maccabi street. Over the course of case 512, an associate of Abergil’s was convicted of planning to assassinate another local rival, crime boss Asi Abutbol.

Abergil’s dealings in the U.S, including the murder of an Israeli drug dealer who had travelled to Los Angeles to work with a local gang in moving Abergil’s ecstasy, ultimately led to his arrest in 2008 and initial extradition to the U.S. in 2011. There he was convicted on narcotics, racketeering and murder charges.

He was then returned to Israel where he served the rest of his U.S. sentence as case 512 got underway.

Prosecutors hailed the ultimate verdict as a powerful message to criminal groups in Israel.

“This is the end of an era, the significant message was in the verdict and the sentence closes a circle," said prosecutor Sharon Har Zion, according to Ynet.

Apart from Abergil, another associate was also sentenced to three concurrent lifetimes behind bars while seven others were handed sentences ranging from five to 25 years.

"This is the final chord of a huge and complex case,” said Judge Gilia Ravid. “The proceedings revealed a violent and powerful criminal organization, whose activities are world-wide. Violent acts including murder were committed, while completely ignoring the possibility of harming innocent people."

“I cry for my son,” the mother of Moshe Mizrachi, one of those murdered in the Yehuda Ha-Levi street bombing said. “And I am glad that he [Abergil] received his sentence, that he will rot and die in prison."