Montenegrin authorities seized in the Port of Bar more than 5,000 packages of illegal tobacco products bound for Serbia and estimated to be worth some three million euro (US$3 million), the country’s Revenue and Customs Administration announced on Wednesday. 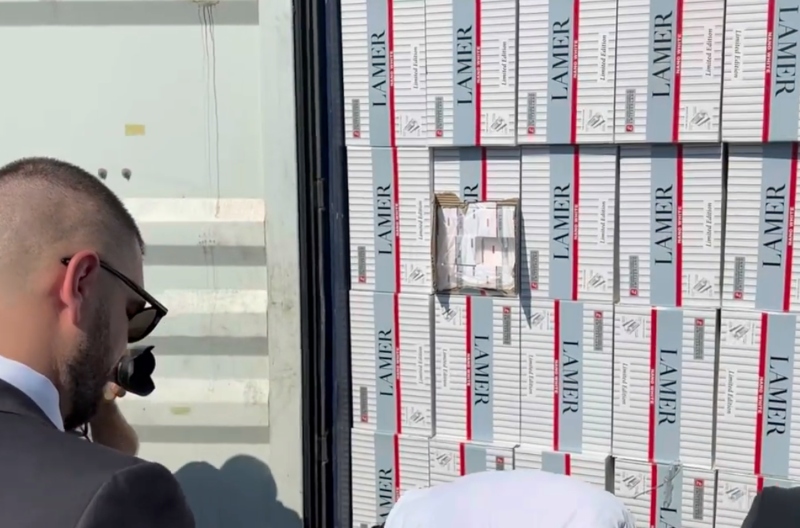 Montenegrin authorities seized US$3 million worth illicit cigarettes, intended for Serbian market. (Photo: Uprava prihoda i carina Crne Gore/Facebook, License)The Director of the Revenue and Customs Administration, Rade Milošević, explained that Montenegro does allow the transit of tobacco products, but that possible abuses must be stopped.

Local media reported that the illicit cigarettes belonged to the Serbia-registered Kozd Company of a Montenegrin businessman from the town of Nikšić.

For quite some time, authorities have been following the cargo’s movement. Containers with “Dolce” and “Lamer” cigarette brands were reportedly first loaded to Frankfurt Express containers at Dubai’s Jebel Ali port in June.

The cigarettes then appeared in the Greek port of Piraeus in mid-July, where they were loaded on the “Wec Majorelle” container ship that was sailing under a Cyprus flag, according to the report.

Once the ship arrived in Bar, and when customs inspectors detected the unlawful commodities, the crew sought to reload the cargo, but officers chose to hold the consignment in the port.

After the ship arrived in Montenegro, the owner tried to import the cigarettes to Serbia but was not allowed to and asked for permission to return them to the ship. The request was approved but then instead of returning them to the ship, he tried to keep them, Director Milošević explained.

He also said that the Revenue and Customs Administration intends to continue to combat illegal tobacco issues in Montenegro, which is known as a tobacco and cigarette smuggling hub.

As a result of its fight against cigarette and tobacco smuggling, the government collected a record amount of excise on tobacco goods, totaling 35.32 million euro ($35.21 million) from May to August – 74.2% or 15 million euro ($14.95 million) more than the previous year.