Prosecutors in Peru asked a court to prevent the First Lady Lilia Paredes from leaving the country for at least three years since she is under investigation for organized crime and money laundering. 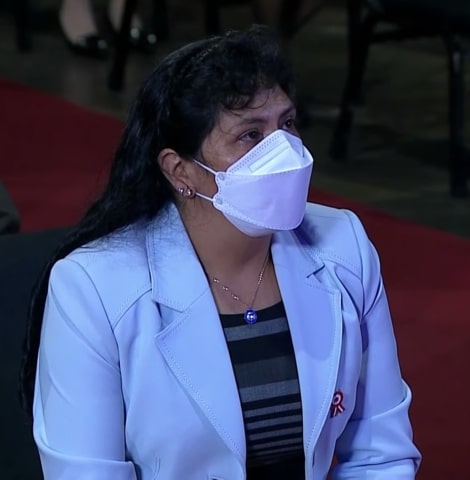 Peru's First Lady, Lilia Paredes. (Photo: Presidencia de la República del Perú, Wikimedia, License)Although President Pedro Castillo assured that his wife would hand over her passport, a few days later the First Lady’s lawyer Benji Espinoza confirmed that she did not do that. This prompted the Prosecutor’s Office to request a 36 month-long travel ban for Paredes.

The same ban was requested for her brothers Walter and David Paredes, as well as for the frontman Hugo Espino Lucana, who has been released from prison after reaching a plea deal.

Paredes is accused of leading a criminal group that secured public works contracts fraudulently with the help of high-ranking officials.

According to prosecutors, Castillo’s wife and her siblings Yenifer, Walter and David Paredes were members of a criminal group in which Lilia Paredes coordinated “to make viable, finance and expedite projects related to the execution of public works in different entities of the Peruvian government” through her sister Yenifer, “with the knowledge and consent” of Castillo.

Prosecutors described Yenifer as a lobbyist “since she searched and attracted mayors from various parts of the country to offer them viability and speed in financing their public works projects.” Last Tuesday, prosecutors requested a 36 month-long preventive detention for Yenifer, Castillo’s sister-in-law.

According to the investigation, this criminal network would have “managed to obtain more than 6 million soles (about US$1,5 million) in public works for various municipalities.”

Lilia Paredes allegedly “maintained a close relationship” with members of the criminal group to coordinate with them the execution of those works, knowing that those who were going to be favored during the tender procedure were people closely related to the presidential palace, friends, trusted individuals and relatives, investigators believe.

Last year, the frontman Espino Lucana said that he had met with Lilia and her sister, who “required a cell phone chip in the name of a third person for use by the coordinator of the criminal group, Lilia Paredes, since they feared they could be intercepted.”

Although the First Lady is not facing any formal charges at this stage of the investigation, Castillo said that his wife is willing to clarify the accusations against her.

Her lawyer Espinoza told CNN that this investigation contains a set of deficiencies and omissions he is going to question in a timely manner. “I am not going to anticipate yet what the exact appeal will be, but it will be questioned.”

Yenifer could be sentenced to 23 years in prison, while Lilia Paredes could face at least eight years.