Interpol has uncovered that even on a small scale, organized crime generates hundreds of millions of dollars from pollution-related offences annually, with such devastating consequences to local communities and the environment that it has described it as a global phenomenon. 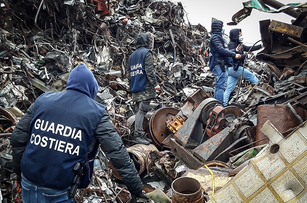 From a small sample size of only 27 cases, Interpol noted that organized crime generates US$175,000 to $58 million from pollution-related conspiracies, with an average of $19.6 million from each case. The combined proceeds totalled half a billion U.S. dollars.

This was not the only cost to the host-countries’ environments and legitimate economies. Clean up and decontamination costs ranged from $6 million to $37 million per case, for an average $15.6 million, almost equalling the damage inflicted by the perpetrators.

Document fraud and financial crime are frequently employed to facilitate such offences.

In Spain, for instance, 14 people were arrested back in June on suspicion of illegally dumping more than 115,000 tonnes of hazardous waste.

Further probing revealed a conspiracy going back as far as 2015 to dump high-level contaminants into open-air landfills and the Mediterranean Sea; all the while, the group allegedly falsified documents to make it appear as if the waste had been properly treated beforehand.

The pollutants, which included asbestos and vats of sulfuric acid, had health authorities concerned that should they seep into the earth and ground water, they would eventually find their way into the local food chain.

Another conspiracy, this one a case from Interpol’s investigation, involved transnational crime groups illegally exporting waste from the U.K. and dumping it in Poland, resulting in roughly 40 waste fires across the country.

Interpol’s interest in environmental crime has also revealed an alarming amount of marine-related offences which can have disastrous consequences for the planet’s underwater ecosystems.

“Criminals believe marine pollution is a low-risk crime with no real victims. This is a mistake,” said Interpol Secretary General Jurgen Stock.

Last year, in what the crime agency dubbed Operation 30 Days at Sea 3.0, approximately 1,600 marine pollution offences were detected in just a single month. This included 1,000 offenses in coastal areas, such as the illegal discharge of sewage, mercury, plastics, and other contaminants that resulted in serious water contamination.

Italy’s Coast Guard alone seized 11,000 tonnes of metal scraps mixed with plastic and other contaminants that criminals had attempted to load onto bulk carriers destined for Turkey.

Meanwhile, Indonesian environmental authorities noted that they had to contend with 65 oil spills during the operation.

Interpol’s report concluded by observing how environmental crime isn’t conducted exclusively by centralized mafia-style organizations, but also by groups who operate under the cover of legitimate businesses.

“This decentralized structure,” the crime agency wrote, “reflects the way that much cross-border business is done, involving global value chains in which services are regularly subcontracted across a largely ‘horizontal’ network of economic actors.

Ultimately, what this means is organized criminal groups and legitimate actors have similar economic interests when it comes to pollution.

It is for these reasons that Wil van Gemert, Europol's Deputy Executive Director, said after the inaugural 30 Days at Sea operation that “this is why law enforcement must team up on a global scale to build strong international links with specialized experts so we can tackle this devastating crime while ensuring a healthier, safer planet for all.”