A month-long, world-wide law enforcement operation aimed at investigating maritime pollution found 500 offences, including illegal discharges of oil and garbage from ships, violations of ship emissions rules, as well as river pollution and runoffs from land to sea, an Interpol statement said on Tuesday. 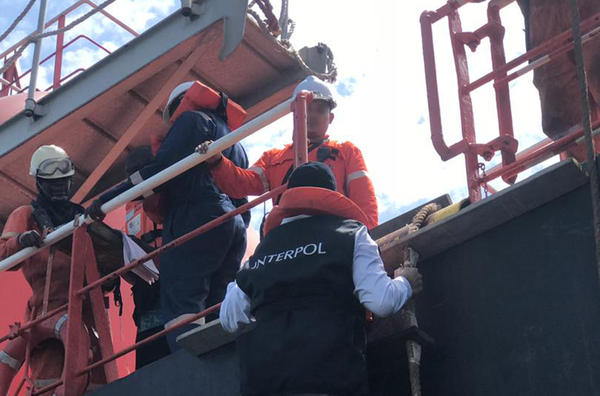 Interpol inspects ship (Photo: INTERPOL)The operation, called ‘30 days at Sea’ is the first of its kind, lasted from Oct. 1 to 31 and involved more than 250 law enforcement and environmental agencies from 58 countries.

The international effort led to more than 5000 inspections, starting at least 185 investigations.

“Criminals believe marine pollution is a low-risk crime with no real victims. This is a mistake,” he said.

The agency said that serious contaminations have included animal farm waste flowing into the Philippine coast that affect the waters where local people fish and play. A German ship had spilt 600 liters of palm oil into the sea and Ghana discovered gallons of oil had been allegedly dumped into the ocean.

“This is why law enforcement must team up on a global scale to build strong international links with specialised experts so we can tackle this devastating crime while ensuring a healthier, safer planet for all,” said Wil van Gemert, the Deputy Executive Director of Europol which Interpol launched the operation with.

These and other revelations of environmental violations came from tech used by authorities like satellite imaging, drones, and aerial surveillance, according to the agency.

The United Nations’ Environment Executive Director, Erik Solheim, indicated that marine pollution could be tackled within the next 10 years, following the operation. “But we need the help of our law enforcement partners to make sure that there is no impunity for the perpetrators of marine pollution crime,” he cautioned.

A campaign in partnership with UN Environment begun Nov. 13, illustrating the impacts of marine pollution on the world.