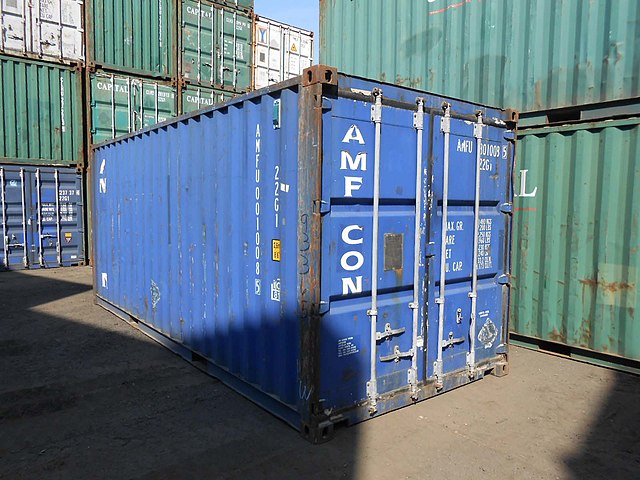 Containers, due to lack of routine check-ups, have become a favored way of moving illicit bulk consignments. (Photo: IPLManagement, Wikimedia, License)The study warned that the SEE’s hundred plus ports and 12 container terminals serve as key entry and exit points for large-scale illicit trade in the Adriatic, Aegean, Black and Ionian Seas and the Danube river.

“The region’s proximity to lucrative markets in western Europe, its links to North Africa and Turkey and increased traffic from Latin America and Asia, combined with vulnerabilities linked to corruption, create ideal conditions for criminal networks to engage in such trafficking,” said the report published on Tuesday by Global Initiative Against Transnational Organized Crime (GI-TOC).

Between 2018 and 2021, roughly eight tonnes of cocaine were seized in SEE ports, the report noted.

Opiates and synthetic drugs, mainly heroin, arriving via Turkey and the Middle East, are regular intercepts at regional ports also.

“Some of these shipments supply local drug markets, but many are transiting the region to supply markets in western Europe,” said the report.

Approximately 80% of all goods traded worldwide are shipped via sea, most of the time in containers. Only 2–3% of these containers are checked regularly - making them the preferred mode of transport for trafficking goods in bulk in the Balkans, found the report.

Cigarettes, especially in Greece and Montenegro; waste, specifically through Black Sea ports; and weapons are among illicit commodities smuggled in bulk along the naval route.

Despite major seizures, however, there haven't been many arrests of major smugglers along the route.

“This points to either weak prosecution or an umbrella of protection covering illicit activities in some Balkan ports,” said the report.

The study assessed nine ports along the Balkan maritime route, which revealed how investments in port infrastructure can be linked to money laundering and corruption, demonstrating a link between the trade points and organized crime.

Some of these ports, due to vulnerable governance and geographical position, are crime magnets.

Some on the other hand, are safe havens, not for criminals solely, but for “the political and business elites that provide protection for smuggling and who profit from the trade, including through money laundering,” the report said.

SEE authorities have made great efforts in recent decades to combat such threats using International Ship and Port Facility Security (ISPS) Code measures, but oversights remain, for instance due to insufficient scanners and incentives for corruption in some ports, added the Geneva-based NGO.

Additionally, the report provided an insight into trafficking along the Danube river, which flows through much of Central and South-eastern Europe, and said officials must keep an eye on the route as its threats often go underestimated by law enforcement agents.