When Spanish authorities raided the home of a suspected drug trafficker in the Valencian town of Guadasser, they were expecting to find drugs and weapons. Instead they found a trove of archaeological artifacts stretching back to the 12th century which were suspected to looted. 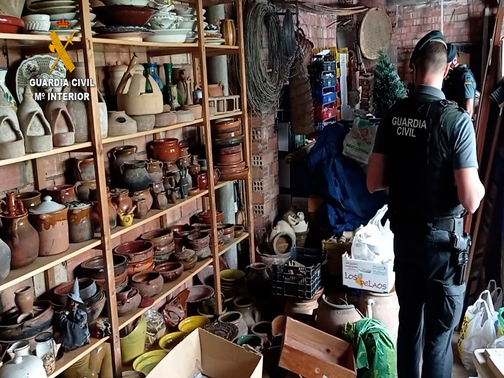 The find represents more evidence of the links between the global trade in looted antiquities and other forms of organized crime. (Photo: Guardia Civil, License)“The agents have found archaeological remains of ceramics - such as tiles, pots and bowls - dating between the 12th and 18th centuries. Some of the pieces were arranged on work tables for classification and restoration, while others were already restored and displayed in different areas of the home,” Spanish authorities said in a statement.

The 68-year-old owner was arrested on charges of crimes against historical heritage, against public health, drug trafficking, and illegal possession of weapons after an unregistered rifle and shotgun were also found.

“Yet another example of overlap between different commodities in transnational criminal networks,” tweeted the ATHAR Project which tracks the illegal antiquities trade online.

The illegal antiquities trade is a multi-billion dollar global industry, according to a 2018 report by Standard Chartered Bank and in recent years law enforcement has begun to see how it ties in with other criminal industries.

It’s not just an industry that only affects wealthy buyers in the West either. Antiquities trafficking frequently funds militancy and organized crime in the source counties as well. Groups which have no compunctions about trafficking in arms or narcotics, rarely also have issues trading in their nations’ cultural heritage.

“Organized crime has many faces. The trafficking of cultural goods is one of them and it is not a glamorous business run by flamboyant gentlemen forgers, but by international criminal networks,” said Catherine de Bolle, Executive Director of Europol after a massive crackdown on the trade in 2020.