In another blow to criminal groups involved in baby eel trafficking, European security forces said they arrested 49 suspects and seized more than one tonne of eels worth nearly US$2 million. 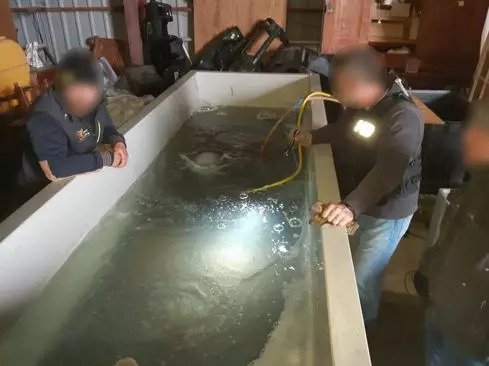 Nearly 50 people arrested in an anti-baby eel-trafficking operation. (Photo: Europol, LicenseThe sixth phase of Operation Lake targeted the trafficking of baby eels, or glass eels, which is seen as one of the most devastating crimes against wildlife which generates illicit profits estimated to exceed US$3 billion in peak years.

The European eel population has decreased by 90% in recent years.

However, operations like Lake VI help decrease the poaching, as incidents involving the trafficking of eels have fallen by an estimated 50% since 2016 - the year after Operation Lake was launched. Since then, more than 500 individuals have been arrested and 18 tonnes of glass eels were saved from smugglers.

Glass eels are usually bought from poachers, camouflaged to trick scanners and shipped as cargo declared to customs as something else.

Authorities say with the recent relaxation of COVID-19 travel restrictions, criminal groups rely on human mules who carry “suitcases” that keep glass eels alive for up to 48 hours.

In the middle of much of this, Asia emerges as one of the main destinations. Once the eels arrive in Asia, they are grown in fish farms and then distributed to different markets around the world. Glass eels are seen as a delicacy in many Asian countries.

It is believed that around 100 tonnes of young eels are smuggled every year from Europe, with prices reaching staggering numbers of up to several thousand dollars per kilo.