Authorities said that in two unrelated operations, Spanish police recovered the largest amount of synthetic cathinones ever found in Europe and arrested 61 suspected members of a gang that bribed officers to turn a blind eye to drug deliveries to Europe. 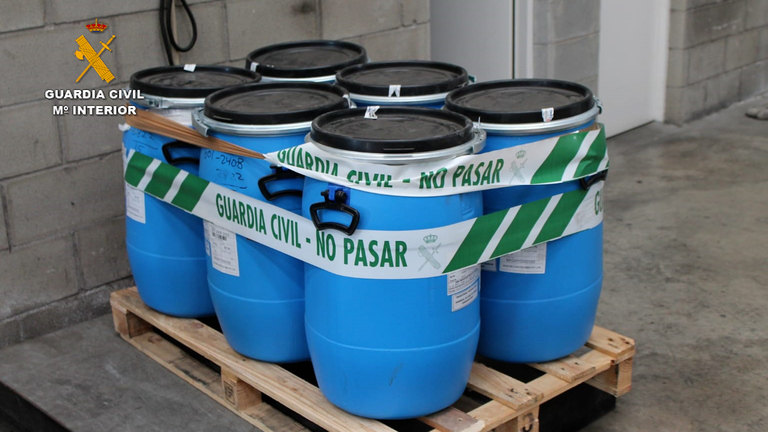 Spanish Police seized record amount of synthetic Cathinones. (Photo: Guardia Civil, License)The cases show how much corruption has infiltrated society having in mind that private companies, police and customs officials were allegedly involved in those crimes.

In one case, the Spanish Civil Guard (Guardia Civil) seized 3.2 tonnes of cathinones, with a market worth of up to 61 million euros (US$65.45 million), the police said in a statement.

The inquiry into the matter began earlier this year, after reliable evidence was discovered during an unrelated search in France, hinting that some port facilities in Barcelona may have been utilized for drug hiding.

The investigation found that three companies, involving custom specialists, imported huge amounts of the psychoactive material, then fabricated customs reports to avoid any possible inspection control, according to the statement.

In another operation, supported by the EU law enforcement agency Europol and the Economic Crime Center, the Guardia Civil and the Spanish National Police (Policia Nacional) have dismantled a drugs trafficking network that allegedly relied on corrupt law enforcement and customs officers to ship hundreds of millions of euros worth of cocaine and hashish into Western Europe.

A total of 61 people were detained for their involvement in this criminal activity, including five Civil Guard members, one National Police officer, and one customs officer, who were identified owing to Europol and Eurojust coordination, Europol said in a statement.

“These arrests follow an 18-month long investigation into two criminal gangs, known as ‘Clan de Tanger’ and ‘Clan del Sur’, who are believed to have smuggled over 16 tonnes of cocaine and 150 tonnes of hashish via the Strait of Gibraltar into Spain for further distribution across Europe,” read the statement.

The dismantled criminal network is thought to be the most active network operating in the Algeciras port area. The gang would bribe corrupt police and customs officials to guarantee that the drugs – hidden amid shipments of tomatoes, watermelons, and melons – were not discovered when they arrived at the port of Algeciras.

Europol stressed that cases such as this one involving law enforcement and customs officers show how much corruption has infiltrated society.

“In its 2021 Serious Organized Crime Threat Assessment (SOCTA), Europol highlighted that over 60% of criminal groups in the EU engage in corruption, making it a key threat to be addressed in the fight against serious organized crime,” read the statement.

The EU police also recalled that its European Financial and Economic Crime Center has established a specific team of specialists dubbed Analysis Project Corruption, to combat it.