The process of organ transplantation, developed over the last century, has been hailed as a modern miracle, but, according to a new report by Global Rights Compliance (GRC) it has also spawned a new and deadly trade that entails a shockingly brutal method called ‘Organ Pillaging.’ 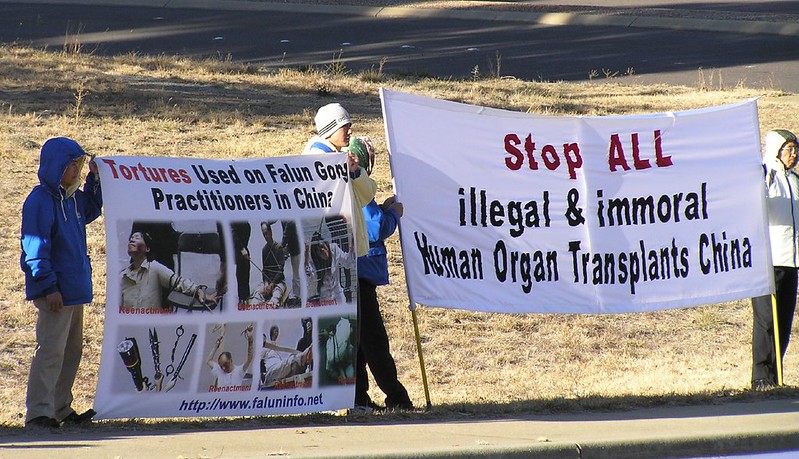 Organ transplants have exploded in China despite an apparent deficit of willing donors. (Photo: Pierre Pouliquin, Flickr, License)“This means that organs are harvested from living bodies, including without the provision of anesthetics, resulting in the death of the “donor” patient,” GRC Explained. “This practice has been condemned by civil society and governments as one of the most barbaric and heinous of international crimes that can take place.”

A global shortage of organs has seen demand far outstrip the supply available through national transplantation programs in a number of countries, the report said. This is why instances of the so-called “transplant tourism” have increased two-fold over the past two decades, now accounting for over 10% of the world’s transplants, GRC said.

Among the biggest offenders is China, where ‘tourists’ and locals are being matched with organs at rates far quicker than elsewhere in the world.

“From 2000 onwards, the People’s Republic of China (PRC) leapt from a “follower” to a “leader” of worldwide transplantation technology,” GRC said. “Despite the absence of a voluntary donation system, the organ transplantation hospitals in the PRC tripled within four years, and transplantation surgery, previously conducted nearly exclusively with kidneys, expanded rapidly to surgeries involving hearts, lungs and livers.”

Though China already claims that two thirds of all organs used in transplants were obtained from death row prisoners - who China also says consented to the donations - GRC found that the numbers don’t add up and death sentences have been on the decline, while transplants continue to rise.

Instead, many organs are believed to come from members of oppressed ethnic and religious groups in China, such as the Falun Gong Buddhist sect, and the Muslim Uyghur minority who have been imprisoned enmass over the last decade.

As such, GRC believes that the narrative around organ trafficking can't just focus on it as an organized crime, but also a human rights abuse.

“A particular focus on forced organ harvesting as crimes against humanity serves to highlight the severe risk of medical institutions and transplant associated entities being complicit in widespread or systematic attacks on civilians who are detained, and their organs forcibly extracted, killing the victims in the process,” the GRC report said.

“Like all crimes against humanity, forced organ harvesting depends upon the support of a range of medical facilitators, including directors of transplant units and hospitals, and administrators of medical and testing facilities,” it explained.

The organ trade is also a lucrative industry for organized crime and is believed to bring in anywhere between US$840 million and $1.7 billion each year, according to GRC.

Major health organizations such as the World Health Organization have called on countries to criminalize the selling or buying of organs for money. Currently Iran is the only country where such sales are legal.

Nonetheless, the lucrative criminal industry in many other parts of the world and the financial incentives of organ trade make gaging true consent hard to verify.