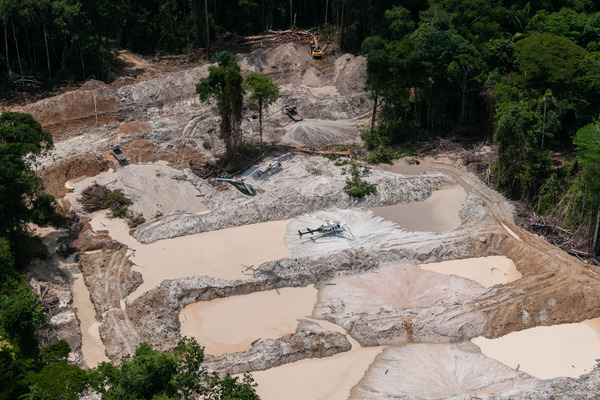 Illegal gold minning in Brazilian Amazon forest. (Photo: IBAMA, License)The Hutukara Yanomami Association (HAY), an NGO that advocates for indigenous rights found that the ringleader of an illegal mining operation, – the so-called “Dona Íris,” – and her gunmen are behind several violent incidents involving the Yanomami people in the last year.

When henchmen, allegedly working on her behalf, appeared on the Uraricoera river earlier last year, they drowned the children of an indigenous family who were bathing. Their high-power motorboat’s wave knocked the children down into the river's current.

In response, a group of Yanomami youths stopped five miners on board a boat traveling upstream, raided it of nearly 1,000 liters of airplane and helicopter fuel and turned the boat around.

Even before the attack, the Yanomami community was already on edge. In the preceding weeks, HAY reported armed illegal miners had invaded several local communities, resulting in skirmishes that left at least one miner and one indigenous person dead.

Before the miners arrived, “the fishing was good, the hunting was good,” an indigineous leader said, according to HAY.

By late 2018, illegal mining had destroyed 1,200 hectares – about 1,200 soccer fields – of the Yanomami’s land and the destroyed area has since more than doubled, reaching 3,272 hectares, according to the report.

This brought on an explosion of malaria cases in several Yanomami communities. The number of cases grew by more than 1,000% in recent years. The disease is  transmitted by the bite of infected mosquitoes. Wet and flooded environments, such as the mines in the Amazon rainforest, significantly increase the mosquito population and then the number of cases.

The most significant period of destruction was between 2020 and 2021, according to HAY. Miners, desirous of gold, devastate the gardens of the Yanomami, who then become dependent from food brought in from elsewhere, the report said.

The miners and their henchmen control everything from the mines themselves to local commerce, logistics and encampment infrastructure. The criminal groups are connected with everything from brothels to underground canteens.

After the retaliation by the Yanomami, a mercenary group, the Primeiro Comando da Capital (PCC), or the First Command of Capital, appeared as a new actor in the region, offering “private security services” to the miners and their infrastructure.

The PCC allegedly supports mining operations in Uraricoera by supplying and transporting goods for the miners.

As organized crime increasingly overlaps with environmental crime, this phenomenon has already been named as “narcogarimpo,” or narco-mining.

This ecosystem has resulted in several instances of abuse against local indigenous girls and women.

According to one indigenous father, an illegal miner told him “you don't order our food for nothing! Clearly you didn't bring your daughter! Only after sleeping with your daughter will I give you food.”

“If I take your daughter, I won't even let you be in need,” he added.

All this just brought nothing but anger and frustration to the tribe.

“I don't want those bad things! You are violent! Your ‘children’ are violent. This whole bad situation of aggression was left here!” an indigenous leader said. “I do not want it! You left everything terrible for us,” he was quoted as saying.

The illegal groups operating out of Yanomami lands are strengthened by institutional fragility, HAY’s report said.

In Brazil, a self-declaration made by bearers or transporters regarding the origin of the gold is enough to be considered as legal. However, legal and illegal gold are commonly mixed to ensure that trafficked gold finds its way to the market.

In the first half of 2019, the Amazonian state of Roraima, home of the Yanomami, had exported about US$10 million in gold to India, despite no legal mining authorized in the state.

Civil society organizations and HAY argued that to end the illegal industry, national regulations for the gold chain need to be applied, alongside regularly dismantling illegal mining sites, creating and maintaining security bases in strategic locations as well as destroying illegal infrastructure, such as clandestine airstrips and machinery.