Spanish police discovered a veritable underground natural history museum and seized more than a thousand taxidermied animals, including some 400 protected and endangered species. 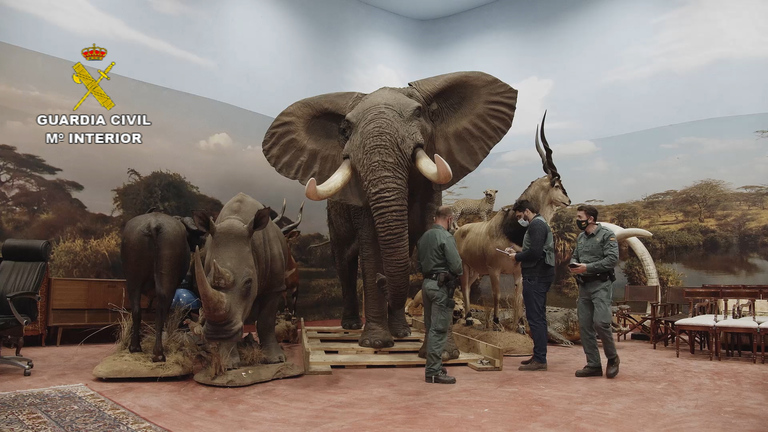 Spanish police seized thousands stuffed animals from an underground museum. (Photo: Guardia Civil, License)Officers found the hierarchy of the jungle laid bare inside a warehouse in Valencia, with hundreds of elephant tusks forming a corridor leading to a den of big cats, from cheetahs to roaring lions. Overlooking them were the mounted heads of dozens of herbivores from gazelles to buffalo, while stuffed panthers and other predators were posed slinking amongst the ivory tusks. Crocodile skin thrones and elephant legs stools were spread throughout for visitors to rest on.

In one corner, among a flock of argali, originally from the mountains of central Asia, hid a snow leopard. Less than 10,000 adult snow leopards are believed to exist in the wild.

The stuffed animals and natural objects were allegedly in the possession of Francisco Juan Ros García, the son of the deceased Valencian businessman Francisco Ros Casares, who had initiated the collection in the 1970s and 1980s, local media reported.

“It was a daunting situation to see. That amount of tusks and naturalized pieces has not happened,” the Spanish lieutenant Carlos Domínguez told local media.

It was only after a Spanish court had issued an order that officials could get inside the 50,000-square-meter warehouse in the town of Bétera, Valencia. They were tipped off to the existence of the ‘museum’ when they discovered two ships in the city's harbor with another thousand dissected specimens on board including 405 endangered species.

On the boats, the officials also found the remains of a “Sahara oryx,” a species that has been declared extinct in the wild since 2000. At least two other nearly extinct species were seized, an ‘addax’ or white antelope – originally from the Sahara desert – and a Bengal tiger.

The port of Valencia – along with those of Algeciras and Canarias – are hotspots for wildlife crimes in Spain. Between 2005 and 2014, The Spanish Civil Guard seized nearly 14,000 live animals in the three ports. In addition, nearly one third of the reptile skins seized throughout the world are destined for Spain to be used in purses, wallets and other fashionable accessories.

The wildlife collection stored in the warehouse could sell for over US$31 million on the black market, Spanish police said.

Authorities said they are going to analyze all the documentation brought by Ros García. He may be charged with smuggling and other crimes against the environment.

Ultimately, Spanish investigators said that they hope the animals could be transferred to natural science museums in Spain or could even be donated to a non-profit institution for their conservation, study and exhibition, so that some good may at least come from the affair.