The U.S. sanctioned on Wednesday the leader of the Bosnian Serbs and a TV station believed to be under his control for his “corrupt activities and continued threats to the stability and territorial integrity” of the Balkan country. 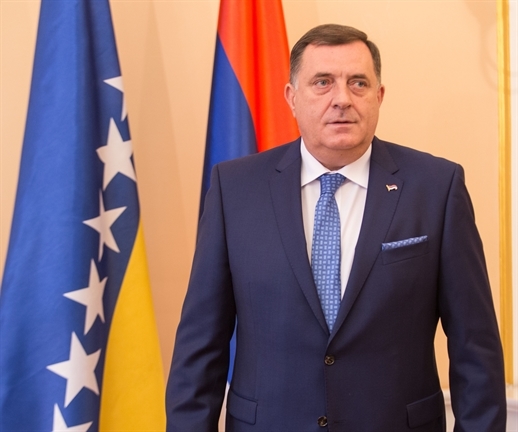 He intends to withdraw the Serbs from the country’s army, judiciary and tax authority and form his own military force, judicial system and tax system. Dodik has been repeatedly warned by international officials not to go down this path as it could trigger another conflict.

The 1992-95 war in Bosnia and Herzegovina devastated the country and took more than 100,000 lives. It ended with a peace agreement that was brokered by Washington and that divided the country in two semi-autonomous regions linked by a common government, parliament, presidency and other state institutions.

“Dodik has undermined Bosnia and Herzegovina’s (BiH) institutions by calling for the seizure of state competencies and setting in motion the creation of parallel institutions in BiH’s Republika Srpska (RS) entity (the country’s Serb-dominated region),” the U.S. Department of the Treasury said in a statement.

It went on to say that Dodik used his official BiH position to amass personal wealth through graft, bribery, and other types of corruption, while inciting nationalism and threatening to destabilize the fragile peace, the sovereignty, and territorial integrity of Bosnia and Herzegovina.

“His divisive ethno-nationalistic rhetoric reflects his efforts to advance these political goals and distract attention from his corrupt activities,” read the statement.

The U.S. already designated Dodik in 2017 for violating the 1995 peace agreement but Wednesday’s sanctions added corruption to the reasons for banning him entry to the U.S., freezing any assets he may have there and criminalizing all financial transactions with him in the U.S. as well as any type of services provided to him or by him.

Dodik told reporters Wednesday evening that the allegations against him were “lies” and that he will not stop pursuing his goal.

“If they think that they will discipline me like this, they are grossly mistaken,” he said.

The sanctions against Dodik and the Alternativna TV (ATV), a station he allegedly controls, have been the first delivered under President Joe Biden’s Executive Order 14033 from June 2021, aimed at “ensuring the stability and security of the Western Balkans, allowing countries in the region to fulfill their potential as free and prosperous democracies…” and “committed to combating corruption and demonstrating the advantages of transparent and accountable governance.”

The U.S. Department of the Treasury’s Office of Foreign Assets Control (OFAC) alleges that Dodik himself exercises personal control over ATV behind the scenes, such as by requiring personal approval on media stories dealing with politically sensitive topics.

ATV has not been serving as a media platform for Dodik’s political strategy only, but also as “yet another avenue for corruption,” according to the statement. He allegedly diverted money from public corporations straight to ATV and subsequently gave ATV-related contracts to members of his family.

“Dodik has substantially increased funding for ATV in recent years and engaged in malign social media influence campaigns through ATV to publish content that advances his political and personal goals” read the statement.

Apart from Dodik and ATV, the U.S. designated one of his associates, Milan Tegeltija, the former head of the country’s High Judicial and Prosecutorial Council, and Mirsad Kukić, the head of a small party and lawmaker in the state parliament.