Spanish authorities, in collaboration with their Dutch partners, reported on Tuesday the arrest of 16 people and the dismantling of a Mexican cartel’s drug trafficking and money laundering operation that saw narcotics being concealed inside concrete blocks and smuggled into Europe. 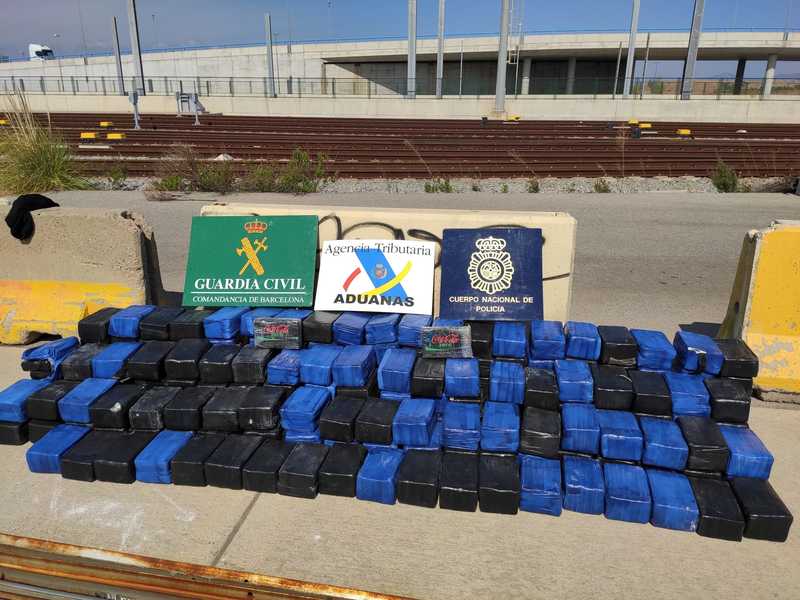 Spanish police seized 2,549 kilograms of methamphetamine, 1,370 kilograms of cocaine, and 17,000 litres of chemicals intended for the production of illicit narcotics during the operation. (Photo: Policía Nacional, Spanish National Police)Authorities have been investigating the scheme since 2017 and found that a company in Mexico was manufacturing the concrete blocks specially for the Beltrán Leyva cartel.

The blocks of precast cellular concrete had a hollow compartment inside and safely protected the drugs during transport, while also making them undetectable to all forms of customs inspections.

Police seized 2,549 kilograms of methamphetamine, 1,370 kilograms of cocaine, and 17,000 litres of chemicals intended for the production of illicit narcotics during the operation.

Historically, cartels and other transnational drug trafficking groups have never failed in discovering new ingenious ways of infiltrating their narcotics into the market.

Examples include storing cocaine bricks within the very walls of the shipping containers themselves, or bypassing customs altogether by commandeering submarines for transport across the Atlantic.

The first breakthrough in the case came in 2019 when Dutch authorities seized 2,537 kilograms of pure methamphetamine in a Rotterdam warehouse.

From there, the investigation led them to a second warehouse in Utrecht, where they discovered 17,000 litres of chemicals intended by the cartel to be used to manufacture illegal drugs.

Spanish police report that the chemicals seized by Dutch authorities in 2019 originated from a company based in Spain that was also working on behalf of the Beltrán Leyva cartel.

As COVID-19 spread across the globe, investigators determined that the cartel’s liaisons in Spain sought to take advantage of the pandemic after wrongly assuming that police would redirect their attention elsewhere in response to the crisis.

As a result, they ordered a larger than normal shipment of drugs concealed in concrete blocks to be delivered from Mexico to Barcelona.

However, after leaving the Port of Barcelona, police intercepted the shipment in the town of Sant Boi de Llobregat, where they drilled through the concrete to discover 834 kilograms of cocaine and 12 kilograms of methamphetamine hidden within.

Reportedly, one consideration that initially helped police discern that the blocks were loaded with drugs is that concrete is not a widely used construction material in Spanish buildings.

The seizure also revealed to investigators a telltale sign used by the cartel to track their product: the loaded concrete blocks could be identified by a blue ribbon and the corporate logo of the Mexican company that manufactured them.

Another goal of the investigation was to determine how the Beltrán Leyva cartel was laundering the proceeds from their European operations.

While the concrete was loaded with cocaine, the blocks’ actual intended customers in Spain were determined by investigators to be legitimate.

When an order was placed, the company would ship the blocks in addition to the ones loaded with cocaine, which would hide amongst their legitimate counterparts.

However, the companies that rented the properties used to store the blocks before they reached their legitimate customers - even for the blocks that did not contain any drugs - were found to be complicit along with several shipping and manufacturing companies.

All of them played a role in the Beltrán Leyva cartel’s money laundering operations.

Investigators discovered that large amounts of money from the United Arab Emirates and Hong Kong were transferred to Mexico via the bank accounts of the cartel’s Spanish-based businesses.

The funds, which police believe were accrued from drug trafficking, travelled through Spain’s financial system and into Mexico’s without the senders reporting the money’s commercial origin.