The U.S. authorities announced Wednesday they have targeted 16 individuals and 24 entities suspected of corruption and serious human rights abuses. The ruling freezes U.S. property and money connected to those people and entities. 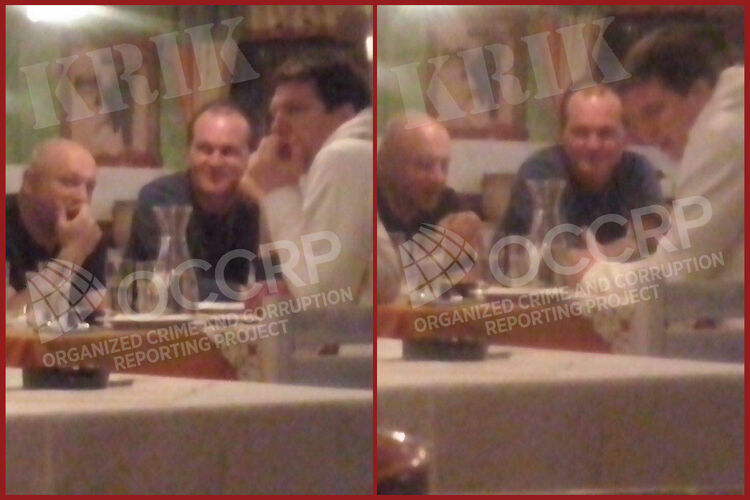 Zvonko Veselinović (left) in a friendly restaurant meeting with Andrej Vučić (right), brother of Serbian President Aleksandar Vučuć. The identity of the man in the middle is unknown. (Photo: OCCRP)The Office of Foreign Assets Control (OFAC) took the actions “pursuant to Executive Order 13818, which builds upon and implements the Global Magnitsky Human Rights Accountability Act,” according to the U.S. Treasury Department’s statement.

“All property and interests in property of the persons above that are in the United States or in the possession or control of U.S. persons are blocked and must be reported to OFAC,” read the statement.

Among those targeted by the U.S. designations is Zvonko Veselinović, described as a leader of an organized crime group and “one of Kosovo’s most notorious corrupt figures.”

The Veselinovic’s group “is engaged in a large-scale bribery scheme with Kosovar and Serbian security officials who facilitate the group’s illicit trafficking of goods, money, narcotics, and weapons between Kosovo and Serbia,” read the statement.

Bribing officials to turn a blind eye to their criminal activities was just part of Veselinović’s criminal scheme operating between Serbia and Kosovo. Serbia has refused to recognize the independence of Kosovo, a former Serbian province with an ethnic Albanian majority.

The U.S. authorities say Zvonko Veselinović and his brother Žarko Jovan Veselinović “had agreements with politicians to help their party win elections, secure political victories for their candidates, and contribute large sums of money to candidates.”

In exchange, those politicians would provide the brothers control of certain areas for their enterprises and allow them to conduct illicit activities without intervention from Serbian authorities, as well as proprietary business information to help the brothers’ business interests.

The Veselinovićs were also often given profitable infrastructure contracts, such as telecommunications development projects, and would often make donations “as a method of laundering money originating from their criminal enterprise.”

The gang’s ties with Serbian politicians allegedly reach as far up as Serbia’s President, Aleksandar Vučić.

“They didn’t give us a dime… The party I lead has more than enough money, thanks to state resources and membership fees. Those are our only resources,” he told Radio Free Europe.

Besides individuals and entities in Serbia, the U.S. authorities also designated current or former El Salvador officials “responsible for or complicit in, or have directly or indirectly engaged in, corruption, including the misappropriation of state assets, the expropriation of private assets for personal gain, corruption related to government contracts or the extraction of natural resources, or bribery.”

The sanctions were introduced against Osiris Luna Meza, the chief of the Salvadoran Penal System and Vice Minister of Justice and Public Security, and Carlos Amilcar Marroquin Chica, Chairman of the Social Fabric Reconstruction Unit.

The pair allegedly “led, facilitated, and organized a number of secret meetings involving incarcerated gang leaders, in which known gang members were allowed to enter the prison facilities and meet with senior gang leadership.” They allegedly negotiated with the leaders of Mara Salvatrucha 13 (MS-13) and 18th Street Gang (Barrio 18) gangs.

Despite that serious criminal history, Salvadoran President Nayib Bukele’s administration provided financial incentives to MS-13 and Barrio 18 “to ensure that incidents of gang violence and the number of confirmed homicides remained low.”

The gangs also got perks for their leaders detained in Salvadoran prisons, such as mobile phones and prostitutes. The alleged cooperation between Bukele’s men and gangs continued despite the COVID-19 pandemic, as Osiris Luna reportedly negotiated with MS-13 and Barrio 18 gang leaders to assist in maintaining Bukele’s national quarantine in gang-controlled areas.

The Treasury Department will continue to target linkages between transnational criminal organizations and corrupt activity, particularly by those in positions of public trust, she said.