A 36-year-old Australian suspected of being connected to two outlaw motorcycle gangs and believed to have been laundering money will have to forfeit about US$1.3 million to the Commonwealth, the Australian Federal Police (AFP) said on Sunday. 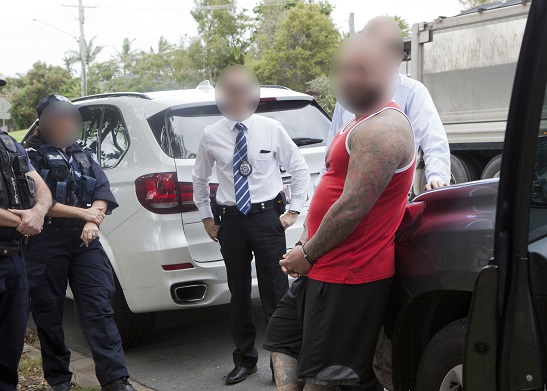 A man arrested during the 2017 Reddig operation. (Photo: Australian Federal Police)The unnamed man was allegedly linked to the Finks and the Mongols - two outlaw motorcycle gangs, declared in 2013 to be criminal organizations. Authorities believe the man had used different bank accounts to launder the proceeds of crime and had invested the dirty money in real estate.

Investigators found that the man was not employed and that his wealth far surpassed income he was declaring to the Australian Taxation Office (ATO).

The forfeiture comes as a result of Operation Redding, which was initiated in 2016 by the Queensland National Anti-Gangs Squad (NAGS). The operation investigated a criminal group responsible for drug trafficking from New South Wales into Queensland, Western Australia and the Northern Territory.

The forfeited funds will be used for supporting crime prevention, law enforcement and other community initiatives.

“Unexplained sources of wealth are often a sign of underlying criminal activity and the AFP is committed to working with its partners to ensure offenders aren’t able to profit from exploiting the wider community,” said AFP Commander Investigations, Andrew Donoghoe.

“If someone is telling the ATO they aren’t making any money, but live in a massive house or drive luxury vehicles, it doesn’t add up and the AFP is committed to investigating where the money is coming from,” he added.