Organized Crime and Corruption: a “Cause and Consequence” of Climate Change

After the U.N. climate panel report called this week for an urgent and drastic cut in CO2 and other greenhouse gas emissions, experts told the OCCRP that organized crime and corruption play a significant role in the state of the climate crisis. 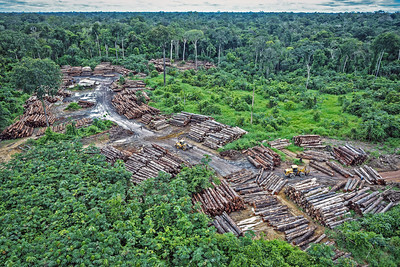 Illegal logging on Indigenous lands in the Amazon rainforest. (Photo: quapan, Flickr, License)The report, issued by scientists on the ​​Intergovernmental Panel on Climate Change and approved by 195 country governments, makes clear that the rapid scale of climate change is “unprecedented” and has already affected many weather and climate extremes worldwide.

Unless there’s a sharp reduction in climate emissions, we’re likely to face a globe that is at least 1.5°C hotter by the end of the century — a level of global warming that will lead to intense and likely irreversible environmental changes, the report said.

Organized crime poses a continued threat to the environment and often occurs hand in hand with fraud and corruption. According to Interpol Secretary General Jürgen Stock, wildlife and forestry crime is the world’s fourth largest illegal trade.

Corruption can directly lead to climate change, Dr. Meredith Gore, a conservation social scientist at the University of Maryland, told the OCCRP, adding that conflict and crime often move in when there is a governance vacuum.

In Brazil’s Amazon rainforest, illegal land grabbing has resulted in around half of the region’s deforestation.

According to Dr. Paulo Moutinho, an ecologist working in the Amazon who co-founded the Amazon Environmental Research Institute (IPAM), a large proportion of illegal deforestation, gold mining and land grabbing are directly tied to political corruption. Local government corruption enables companies or individuals to use forged paperwork to cut down trees illegally in protected areas.

In many cases, Dr. Moutinho told the OCCRP, gold mining in the Amazon occurs while local political officials purposefully turn away from crime, which wreaks havoc not only on the environment but also Indigenous communities.

Organized crime groups have been heavily involved in wildlife crime for decades and in recent years have expanded their operations to an industrial scale, according to the Secretariat of the Convention on International Trade in Endangered Species of Wild Fauna and Flora (CITES).

Organized crime and corruption are both “cause and consequence” of climate change, said Dr. Gore.

“The more vulnerable humans are because of climate change, the more they respond behaviorally,” she said, citing an example of fishing communities in the Yucatán Peninsula who have had to go out further into the sea or resort to illegal fishing when their typical fish stocks migrate due to rising ocean temperatures.

Despite the seriousness of the issue, the scale of environmental crime hasn’t yet been accurately measured, said Dr. Peter Stoett, a professor at Ontario Tech University who researches global environmental politics and crime.

The International Consortium on Combating Wildlife Crime (ICCWC), CITES, INTERPOL, the UN Office on Drugs and Crime, the World Bank and the World Customs Organization have been working together to combat wildlife crime and corruption but a governance gap remains between policy and climate change science.

Part of the problem is an issue of scale: policy might be set for a town or province, while natural science might be focused on a migratory fish stock, Dr. Gore explained.

“Lot of time regulation isn’t changing fast enough, so people on the ground are breaking the rules to get by,” she continued.

Though Dr. Moutinho contends that ineffective rules on the ground have allowed organized environmental crime in the Amazon to flourish, he recommended that the World Trade Organization enforce stronger trade sanctions “to create a system that can identify and favor those producing or trading following the environmental laws, respecting rights, and protecting the environment.”

Although illegal logging, fishing and wildlife trafficking are more documented than other kinds of environmental crime, experts made clear that organized crime can intersect with environmental harm in a vast and complex number of ways, like illegal sand mining, exploitative pollution crimes, carbon credits fraud, and illegal trade in electronic waste.

“Enforcement is an important part of the solution, but may not always address the complex drivers behind environmental crimes,” Rachel Kramer, who works to target natural resource corruption as a part of the World Wildlife Fund, told the OCCRP.

“Seizing illegal timber at port, for example, is an anti-crime measure, but it doesn’t necessarily address the corruption that may have facilitated that crime,” Kramer explained. “Unless investigations look for and address corrupt actions that enabled the shipment’s initial procurement and transit, it may be just as easy for the next one to follow the same steps into the supply chain.”