In an unprecedented move, Mexican officials have sued Smith & Wesson, Beretta, Century Arms, Colt, Glock, Ruger, Barrett and Boston-based gun wholesaler Interstate Arms for negligence in an attempt to halt the ‘iron river’ of guns that flow from the United States every year and end up in the hands of criminals and cartels. 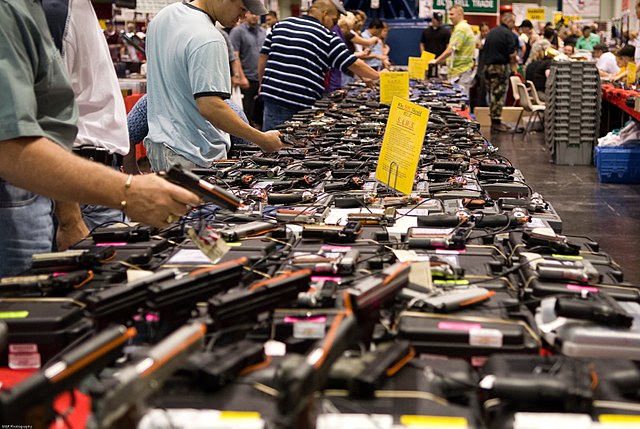 Around 3.6 million guns were manufactured in the U.S. in 2019, while Mexico, by contrast, has one gun store and issues fewer than 50 gun permits annually. (Photo: M&R Glasgow, Flickr, License)U.S. firearm industry leaders rejected Mexico’s accusations that U.S. gun companies are knowingly contributing to illegal gun trafficking and fueling violence in the country. The Firearm Industry Trade Association (NSSF) said Mexico itself is responsible for the corruption at its border.

The lawsuit was filed in the U.S. District Court of Massachusetts, since the companies being sued each do significant business there.

Mexico “brings this action to put an end to the massive damage that the Defendants cause by actively facilitating the unlawful trafficking of their guns to drug cartels and other criminals in Mexico,” the lawsuit, filed on August 4, said.

“For decades the Government and its citizens have been victimized by a deadly flood of military-style and other particularly lethal guns that flows from the U.S. across the border, into criminal hands in Mexico,” the lawsuit reads. ”This flood is not a natural phenomenon or an inevitable consequence of the gun business or of U.S. gun laws. It is the foreseeable result of the Defendants’ deliberate actions and business practices.”

NSSF — the U.S. Firearm Industry Trade Association — immediately rejected the accusations, saying that all guns sold within the U.S. are sold in accordance with the law.

“The Mexican government is responsible for the rampant crime and corruption within their own borders,” said Lawrence Keane, NSSF Senior Vice President and General Counsel.

“Mexico’s criminal activity is a direct result of the illicit drug trade, human trafficking and organized crime cartels that plague Mexico’s citizens,” he said. “It is these cartels that criminally misuse firearms illegally imported into Mexico or stolen from the Mexican military and law enforcement.”

He called on Mexico to bring the cartels to justice and enforce its law, noting that authorities are receiving “considerable aid from U.S. taxpayers.”

More than 16,000 people have been murdered in Mexico this year. Gun violence also has led to attacks of increasing frequency against politicians, police, and the Mexican military — further corroding public security and trust.

The U.S. gunmakers are facing up to US$10 billion in damages, Mexican officials told reporters on Wednesday, according to Reuters. Some legal experts have labeled the suit as a legal long shot but a splashy political gesture.

Around 3.6 million guns were manufactured in the U.S. in 2019. Mexico, by contrast, has one gun store and issues fewer than 50 gun permits annually, according to the statement.

The Mexican government is arguing that ​​the gun manufacturers, motivated by profit, design, market and sell guns in ways they know will make them end up in the criminal market —  neglecting to implement additional safety or monitoring measures even when they’re aware of the frequency of illegal arms trafficking across the border.

Mexico also says that the gun companies have each been put on substantial legal notice of the damage done by negligent arms sales and marketing: the flow of weapons from the U.S. to Mexico — and the correlation between U.S. gun sales and homicides recorded in Mexico in the past two decades — is well-documented in government reports, academic research and the press.

When assault weapons were banned in the U.S. between 1999 and 2004, homicides in Mexico declined. But murders soared beginning in 2004 — the same time that U.S. gun manufacturers ratcheted up production and sales of their military-grade weapons.

The suit also claimed that manufacturers’ aesthetic choices have made some weapons particularly coveted by cartels.

A special edition .38 Colt pistol, engraved with an image of Mexican revolutionary Emiliano Zapata and one of his attributed quotes: “It is better to die standing than to live on your knees,” is seen by Mexican cartel bosses as a status symbol, the suit said.