A controversial prosecutor is stepping in to fill the post left vacant by Guatemala’s top anti-corruption investigator Juan Francisco Sandoval, who was forced out of office just two weeks ago. 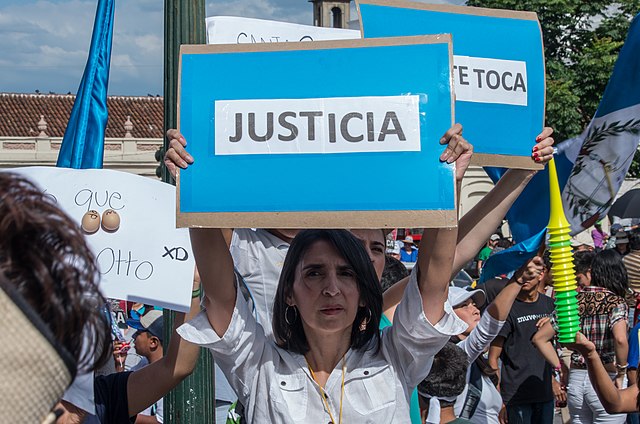 Guatemala anti-corruption protest. (Photo: Eric Walter, Wikimedia, License)Before his appointment as the head of the Special Prosecutor’s Office Against Impunity (FECI), Rafael Curruchiche had been a prosecutor in the Electoral Crimes division, leading investigations against former President Jimmy Morales. Although accusations rose against Morales, Curruchiche did not order his arrest.

According to Guatemala’s Attorney General María Consuelo Porras, Curricuchichi, as well as several others simultaneously picked for posts in the Attorney General's office, were appointed on the basis of their experience in order to increase the organization’s efficiency.

“The Attorney General of the Republic and Head of the Public Prosecutor's Office reiterates her commitment to guarantee the continuity of the fight against impunity and corruption in order to strengthen the rule of law and the culture of legality,” her press release stated.

Carla Valenzuela, who had been filling in as the lead FECI prosecutor in the meantime, is returning to her position directing the Special Methods Unit.

As the head of FECI, Sandoval was primarily responsible for investigations of serious crime. But early morning on July 23, he fled to El Salvador, reportedly out of fear for his life.

Porras said that Sandoval was fired for frequent abuses and for undermining her work.

Sandoval tells a different story: he has said that his firing came as he was investigating corruption cases related to current President Alejandro Giammatei. His forced exit has sparked widespread protests in Guatemala, and Curruchiche's recently announced takeover drew still more criticism.

On Twitter, Sandoval said, “Who else than Rafael Curruchiche to represent the interests of the corrupt?”

Samantha Power, an American diplomat currently serving as the head of the United States Agency for International Development (USAID), publicly condemned the Attorney General for “siding with the corrupt” rather than “siding with its people.”

On Thursday, the U.S. State Department also announced a new visa restriction policy intended to hold corrupt actors to account in Guatemala, as well as in Honduras and El Salvador.