No Justice for Victims a Year After Beirut Blast

Michelle Remlaoui, 28, was taking a shower when one of the largest non-nuclear explosions the world has ever seen wiped out half of Beirut a year ago. The ceiling above her collapsed and the glass around her shattered, leaving cuts all over her body. 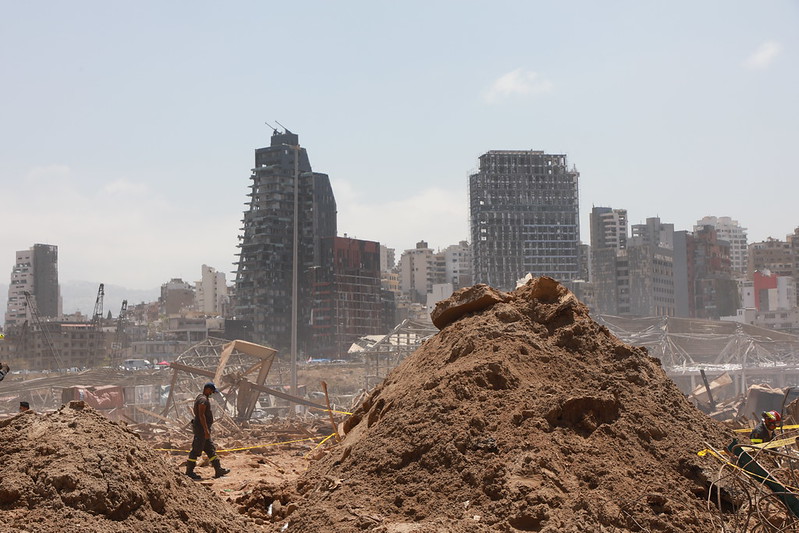 Beirut explosion aftermath. (Photo: EU Civil Protection and Humanitarian Aid, Flickr, License)The blast killed 218 and injured over 7,000 people and centered around some 2,750 tons of ammonium nitrate carried by a cargo ship behind which lies an opaque ownership structure and offshore web investigated by the OCCRP in the weeks following the explosion.

"I'm still paying the hospital bill for the treatment I needed in the explosion's aftermath,” Remlaoui told the OCCRP. “I lost all my possessions. Everything was damaged as my entire building fell apart."

But it’s not just that.

What hurts more now is that a year later, nobody has been charged, tried or convicted for the calamity. Judicial attempts to investigate the conditions that led to the explosion have been obstructed and delayed at every turn.

Remlaoui said she was “disappointed but not surprised," at the lack of answers and accountability.

There was not much faith in authorities before the tragedy, but over the past year, it has been further diminishing by the day. The lack of justice, combined with an economy in tatters as the country faces the worst financial crisis of its modern history, is becoming "unbearable," Remlaoui said.

The anniversary of the Beirut blast on Wednesday is seeing renewed calls from human rights watchdogs and other NGOs for international action to bring justice to the victims, even though previous calls remained unanswered.

The victims and their families called on the U.N. Security Council to launch an international probe only days following the blast. Calls were made for oversight of how aid would be distributed merely a month after. NGOs pressed the international community to intervene on the six month mark, and as recently as last month, calls were made on local authorities to lift immunity on officials in the probe.

So civil society actors have worked to uncover the truth.

In a 700-page report published Tuesday, Human Rights Watch cited evidence indicating the knowledge of senior Lebanese politicians, including President Michel Aoun and then-Prime Minister Hassan Diab, of the presence and risks posed by the ammonium nitrate in the harbor.

Drawing on exclusive documents and interviews, the document highlights the incompetence and sheer negligence of Lebanese authorities in handling the cargo. The watchdog found that Lebanese officials in positions of power ignored “repeated warnings” about the dangerous nature of ammonium nitrate, and were, at a minimum, “criminally negligent under Lebanese law.”

In calling on the U.N. Human Rights Council to mandate an investigative mission into the blast and for targeted sanctions against those responsible, HRW highlighted how the port’s governance structure “created the conditions for corruption and mismanagement to flourish.”

The investigation notes how the Director General of Lebanese Customs at the time, Badri Daher, one of the few officials arrested for their role in the blast, was rife with corruption and bribery accusations in his position at Customs.

Amnesty International on Monday also called on the U.N. to “urgently” set up an investigative mechanism, adding that Lebanese authorities have spent the past year “shamelessly obstructing victims’ quest for truth and justice.”

“Their pain and anger have been exacerbated as, time and time again, authorities obstruct their right to truth and justice,” Amnesty’s Deputy Director for the Middle East and North Africa, Lynn Maalouf said.

For the parents of Alexandra Naggear who was just three years old when the blast killed her, the events of August 4 were a “crime against humanity and should be treated as such,” father Paul Naggear stated during HRW’s press conference on Tuesday.

“All of those involved, directly or indirectly, should be considered as traitors to humanity.”