Bosnia and Herzegovina’s Border Police (GPBiH) seized on Sunday more than 6,000 hemp plants from a camp for the production and cultivation of marijuana near the country’s western city of Velika Kladuša. 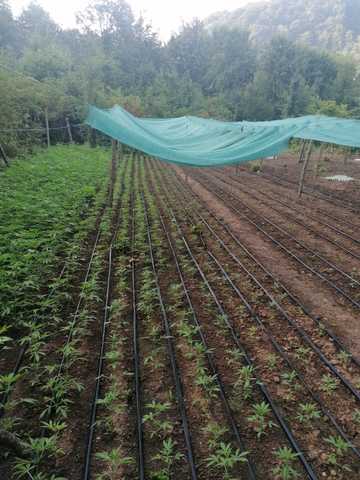 Bosnian police discovered a large hemp field near the western city of Velika Kladuša. (Photo: GPBiH)In the operation codenamed Escobar, the largest and most comprehensive border police action against a drug-related crime to date, police arrested four people, all Bosnian nationals, suspected of organized crime, including illicit production and distribution of drugs, GPBiH said in a statement.

The alleged organized crime group distributed the drug locally, within the country, but also in the European Union.

A total of 110 police officers were involved in Operation Escobar, with the support of Bosnia and Herzegovina’s State Investigation and Protection Agency (SIPA) and the Interior Ministry of Croatia, due to the proximity of Croatia’s border, according to GPBiH.

The statement also said that the Covert Operations Department continues its activities in connection with the Escobar operation.