Forty minutes before midnight on Wednesday, the former President of South Africa, Jacob Zuma, handed himself in to police officers to begin his 15-month sentence for contempt of court. 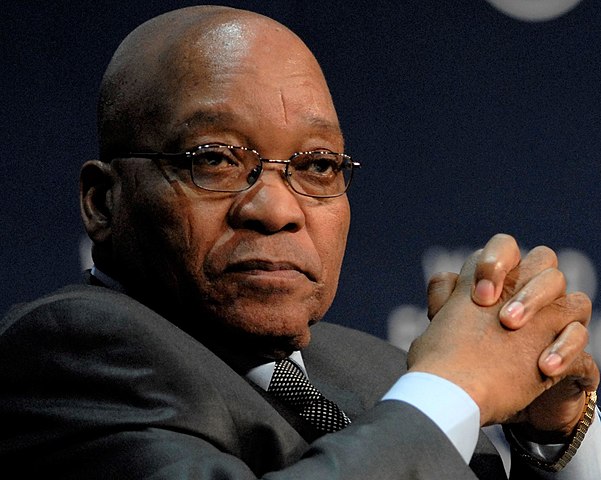 South Africa's former president, Jacob Zuma. (Photo: Matthew Jordaan, World Economic Forum, Wikimedia, License)Zuma was found guilty in absentia last week by the country’s highest court for refusing court orders to testify in a corruption investigation. Earlier this week, he had refused to hand himself in, and police were given until Wednesday to bring him in.

Hours earlier, the Zuma Foundation had initially said that Zuma attempted to delay the arrest until after his appeal is heard this Friday in court. The BBC reported that a delegation of officers spent hours inside the former President’s home negotiating with Zuma on the conditions of his arrest.

The Jacob Zuma Foundation tweeted late on Wednesday night that “President Zuma has decided to comply with the incarceration order. He is on his way to hand himself into a Correctional Services Facility in KZN.”

The announcement was followed by separate confirmations from police officials that Zuma is currently in custody. He is currently being held at the Estcourt Correctional Centre in the coastal province of KwaZulu-Natal.

It’s the first time that a former president has been imprisoned in the country.

The corruption allegations largely surround Zuma’s dealings with the Gupta family, a wealthy South African family that has been accused of attempting to “capture the state” to advance its business interests.

Zuma was forced to step down from his presidency by the governing African National Congress Party in February of 2018 after years of ducking accusations of influence peddling and misuses of funds in his administration.

The former president, an anti-apartheid hero whose first jail sentence was served at the Robben Island prison alongside Nelson Mandela, pled not guilty in May to multiple charges of bribery, fraud, money laundering and racketeering dating to a 1999 arms deal. He’s been accused of accepting bribes from Thales, a French arms company, in exchange for shielding it against investigation.

His daughter, Dudu Zuma-Sambudla, said that she spoke to Zuma while he was en route to jail. She tweeted that “he said that he hopes they still have his same overalls from Robben Island and we laughed hard that at least he won’t struggle with Afrikaans this time round.”

Zuma, who still possesses some political power and public approval despite his administration’s rampant cronyism, said during a press conference over the weekend, “Sending me to jail during the height of a pandemic at my age is the same as sentencing me to death.”

Officials stressed that Zuma would not be receiving preferential treatment while incarcerated, though this has been disputed by experts. He is up for parole in less than four months, or a quarter of his prison sentence, in accordance with South African law. He will be put in isolation for 14 days as a COVID-19 safety precaution.