South Africa’s Constitutional Court ordered Jacob Zuma, the country’s former president, to turn himself in to authorities by Monday after sentencing him to 15 months in prison for contempt of court. 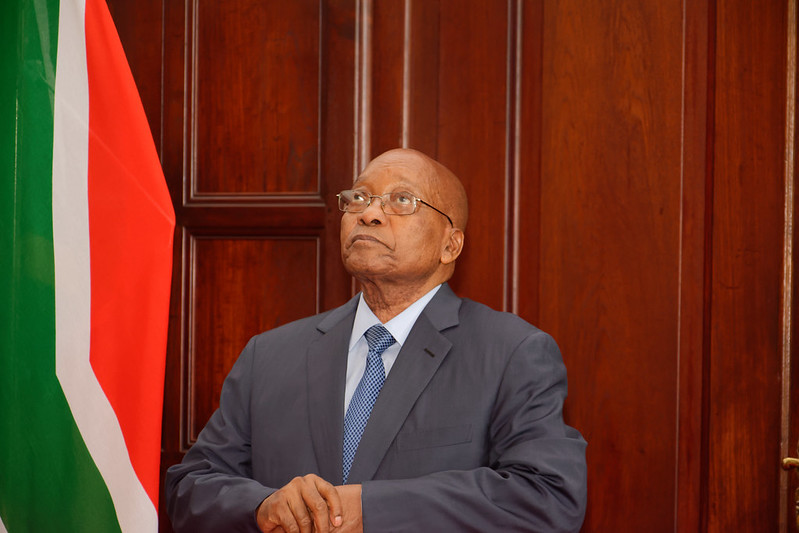 South Africa's former president, Jacob Zuma, sentenced to prison for contempt of court. (Photo: Paul Saad, Flickr)Zuma, 79, was found guilty Tuesday by the country’s highest court after he defied an order to appear at a high-level corruption inquiry earlier this year. Zuma, who has denied any wrongdoing, was not present when the court delivered its ruling this week.

Speaking for nearly an hour, Justice Sisi Khampepe laid out the majority decision, saying that Zuma’s attacks against the court were unprecedented.

“The constitutional court can do nothing but conclude that Mr. Zuma is guilty of the crime of contempt of court,” Khampepe said.

“This kind of recalcitrance and defiance is unlawful and will be punished. I am left with no option but to commit Mr. Zuma to imprisonment, with the hope that doing so sends an unequivocal message…the rule of law and the administration of justice prevails.”

The judge ordered the former president to turn himself in to authorities within five days. If he fails to do so, law enforcement will be ordered to ensure he is “delivered to a correctional center”.

Most of the alleged corruption under investigation involve a slew of corrupt ties and shady deals between the Zuma administration and the well-connected Gupta family, which have been described as “state capture” - a systemic political corruption in which outside interests influence the state's decision-making processes to their own advantage.

Because of these dealings, the African National Congress – which has ruled South Africa since Nelson Mandela was elected in 1994 – forced Zuma to step down from the presidency in February of 2018.

Zuma is separately facing multiple charges of graft, fraud and racketeering after he was accused of taking bribes from the French arms company Thales to ensure the country signed a multi-billion-dollar deal with Thales in 1999. At the time, Zuma was deputy president and was fired in 2005 over corruption allegations.

“We have arrived at a pivotal moment in our history, one of which we can all be proud,” the Desmond & Leah Tutu Legacy Foundation said in a statement. “In 1994, after hundreds of years of cruel injustice through colonialism and apartheid, South Africans voted for a constitutional democracy in which all are equal before the law.”

While the Jacob G Zuma Foundation said it “will not be making any further sound bite remarks on the ConCourt Judgment,” Mzwanele Manyi, Zuma’s spokesperson, told the South African Broadcasting Corporation in an interview on Tuesday: “A dark cloud has covered South Africa today.”

“It is the first time where you go straight from a motion court and skip trial and incarcerate a person. So we have someone who has been incarcerated without a fair trial,” Manyi added.

The former president’s daughter also tweeted about the ruling, saying Zuma was “in high spirits and had no fear.”

“Lockdown or no lockdown we will escort you to serve your time,” she added.

This comes as Zuma’s successor President Cyril Ramaphosa, who was recently cleared of corruption allegations himself, has taken steps to tackle mismanagement and corruption with the country’s government.