Corruption in Myanmar’s jade industry extends all the way to the top of the country’s military, including the family of the country's Commander-in-Chief Min Aung Hlaing, UK-based NGO Global Witness claimed in its latest report on Tuesday. 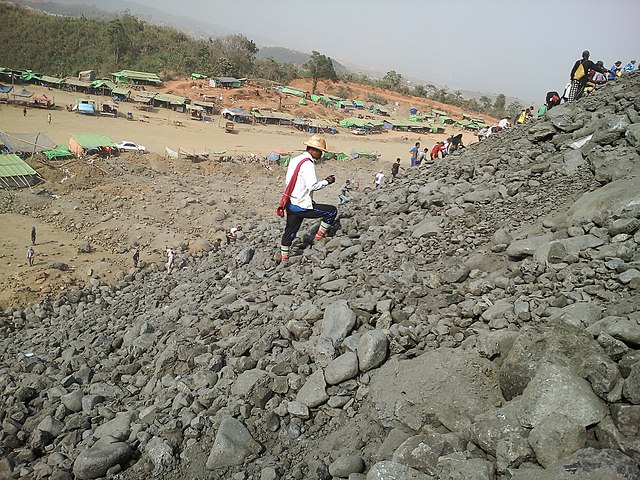 Myanmar's military forces control most of the country's jade mines, believed to be largest jade reserves in the world. (Photo: Yin Min Tun, Wikimedia, License)In the years preceding the February 2021 coup, Myanmar’s military tightened its grip on the lucrative jade trade, even as the new civilian-led National League for Democracy (NLD) administration attempted to reform it.

“The military coup has triggered a new wave of violence in the conflict-ridden sector, demonstrating the danger of armed actors controlling the multibillion-dollar mining industry,” according to Global Witness.

It also claimed that Myanmar's jade sector “has become more corrupt than ever, stoked violent conflict throughout the country and helped fill the military’s coffers,” including those of Min Aung Hlaing, the country’s defacto leader after the coup, and his family.

The country’s NLD government in 2016 suspended all jade licensing, following a series of disastrous landslides that killed hundreds of workers, as well as reports of wholesale looting of the country's natural mineral wealth for the benefit of a few.

Despite the licensing suspension and strong pressure from activist groups, environmentalists, and foreign governments to clean up the lucrative industry, top officials of Myanmar’s armed forces, “military companies and their business allies frequently ignored the licensing suspension and resisted reform at every turn in order to further expand their already dominant role in the industry,” according to the report.

“Our revelations about the military’s increased control of the multibillion-dollar jade trade is emblematic of  [its] broader capture of valuable sectors of the country’s economy, which funds their abuses, fuels conflict and helped enable their recent illegal power grab,” Myanmar Policy Advisor at Global Witness, Keel Dietz, said.

The Global Witness report alleges that, at the time of the licensing suspension, the military conglomerate Myanma Economic Holdings Limited (MEHL) held the single biggest jade and gemstone mining permit.

“The company, which controlled 1,100 active permits at that time, acquired 639 (58 percent) of them during the first few months of 2016 in a frantic resource grab just before the NLD officially took power,” the NGO said. It added that the largest license holder that was not an MEHL subsidiary controlled only 285 licenses at the beginning of 2016, “showing the extent of the military’s dominance of the sector”.

Global Witness reiterated that “those profiting from the endemic corruption in the jade trade include the family of Min Aung Hlaing… with his son accused of receiving bribes to facilitate jade mining.”

Min Aung Hlaing has been under the U.K. and U.S. sanctions for his alleged role in horrific atrocities against the Rohingya population in Myanmar, and, together with his sons, has been blacklisted by the U.S. for the February coup in which at least 53 people were killed and more than 1,700 detained.

The U.K.-based research NGO also warned that a resurgence of violence near the mines in Hpakant, in remote Kachin state, is also contributing to the region's instability.

The army and ethnic guerrilla forces have fought in Kachin for years, but Global Witness claimed that the enemies primarily collaborated to share earnings from mining the world’s greatest jade reserves. The report says the Tatmadaw, a term used for the military, cooperated with “armed militias, and ethnic armed groups such as the Kachin Independence Army (KIA), the United Wa State Army (UWSA), and the Arakan Army (AA) … to dig up jade ever faster and more destructively, even as they were in conflict elsewhere in the country,” according to Keel Dietz.

The latest Global Witness’ report also reveals that jade money from Hpakant “was being directly channelled into the trade in arms, fuelling violent conflict in northern Myanmar, with the UWSA fulfilling part of its jade-related tax obligations to the KIA by providing weapons produced in its own factories and the KIA then selling these weapons, sometimes at a discount, to the AA.”

The report also estimates that up to 90 percent of Myanmar’s jade is smuggled out of the country, most going to China, underscoring the illicit nature of the industry.

The result of the coup and the military structures taking control over the world’s largest jade reserves, according to Myanmar Policy Advisor at Global Witness, Keel Dietz, is that the military and armed groups continue to pillage Kachin State’s natural riches, while the local population in Hpakant suffers the repercussions of brutal war, post-coup repression, fatal landslides, and a drugs epidemic.

Global Witness therefore is calling on the international community “to immediately ban the import of all jade and gemstones mined in Myanmar.” It further noted that China, as the main driver of demand for jade, “has a key role to play in addressing its role in corruption and conflict linked to the trade.”

“In the long term, the international community must support a future legitimate government in removing the Tatmadaw and other armed groups from the jade industry and placing natural resource governance at the heart of peace talks,” the organization concluded.