A Turkish businessman at the center of an OCCRP investigation into Trump-era backchannel diplomacy has been arrested in Austria and now faces extradition to the United States, the Department of Justice announced on Monday. 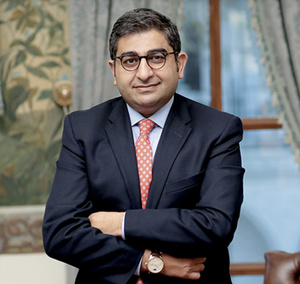 Sezgin Baran Korkmaz (Photo: SBVK)Sezgin Baran Korkmaz was arrested at the request of the U.S. for his alleged role in a scheme — along with Armenian-American organized criminal Levon Termendzhyan and members of a secretive Mormon sect — that defrauded the U.S. government of roughly US$500 million in fraudulent biofuel tax credits. Korkmaz is alleged to have laundered over $133 million of the money through accounts in Turkey and Luxembourg.

The U.S. government will seek Korkmaz’s extradition to Utah to face trial, the DOJ said. His alleged co-conspirators, Termendzhyan and brothers Jacob and Isaiah Kingston, have already been convicted in separate proceedings.

A joint investigation by OCCRP and Law&Crime in March revealed that Korkmaz played a key role in facilitating a 2018 backchannel trip to Turkey by two figures associated with then-U.S. President Trump, former CIA director James Woolsey and current Republican National Committee co-chair Tommy Hicks Jr. The trip was aimed at securing the freedom of Andrew Brunson, an evangelical pastor then imprisoned in Turkey.

Korkmaz was also part of a broader Turkish effort, revealed by OCCRP last year, to quietly influence the Trump administration through a series of middlemen and business associates, many of whom have since faced criminal investigation and trial.

Korkmaz’s case has also proved to be a headache for Turkey’s President, Recep Tayyip Erdoğan. Korkmaz is alleged to have cultivated ties with senior Turkish officials, and has been pictured alongside Erdoğan. The Turkish President has sought to have all pictures of him and Korkmaz together scrubbed from the internet.

Turkey has sought Korkmaz’s arrest and extradition on separate charges.

Korkmaz’s attorney in Turkey, Volkan Murat Dülger, told local media that the businessman wants to stand trial in Turkey, and not in the U.S., as he is likely to face a much shorter prison sentence if convicted. Turkish newspaper Sözcü reported that Korkmaz stayed silent while appearing before a Vienna judge on Monday.