The European Union has imposed sanctions against Belarusian oligarchs and ex-officials - including two investigated by OCCRP - in response to the hijacking of a Ryanair passenger jet and the arrest of opposition activist and journalist Roman Protasevich and his girlfriend last month. 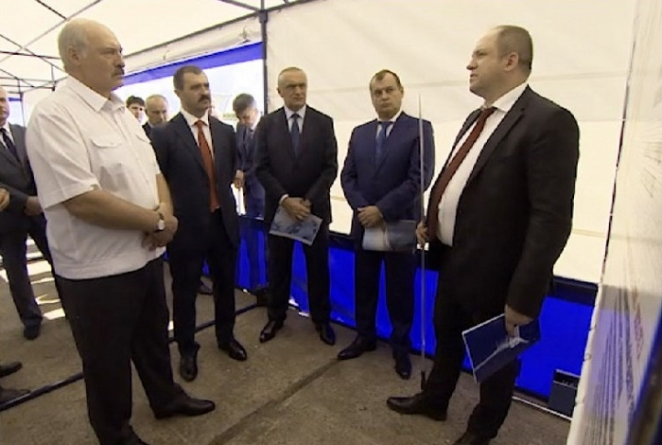 From left: Belarusian President Alexander Lukashenko, his son Viktor Lukashenko, and Belarusian businessmen Mikalai Varabei, Alexei Aleksin, and Alexander Zaytsev. (Photo: Belta.by)Among the dozens of names listed in the latest sanctions, which mainly target members of former president Alexander Lukashenko’s regime, are businessmen Aliaksei Aleksin (Alexei Oleksin) and Alexander Zaytsev (Aliaksandr Zaitsau), who were the subject of an OCCRP investigation published this year, which scrutinises their presence in Lithuania, their ties to Lukashenko’s regime and their mysterious journey to emerge as two of the wealthiest businessmen in Belarus.

In the expanded sanction list, for example, Aleksin is described as someone who “enjoys a close relationship” with Lukashenko and his son Viktor.

Meanwhile, the European Council stressed his influence in the tobacco sector, where Aleksin-linked companies “Inter Tobacco” and “Energo-Oil” were given “exclusive privileges” to import tobacco products to Belarus, based on a decree signed by Lukashenko.

“He was allegedly involved in the establishment of the first government-approved private military company in Belarus, “GardServis,” with reported links to the Belarussian security apparatus,” the document said, concluding that Aleksin is benefitting from the Lukashenko regime.

Zaytsev, in turn, is a former aide to Viktor Lukashenko. He rose to power quietly, keeping a low profile for years until his football club, Dynamo Brest, in 2018 made Argentinian legend Diego Maradona chairman.

At the time, Zaytsev personally greeted Maradona at the airport, while speculation of “Arab sheiks” owning the club were the dominant narrative surrounding Dynamo’s ownership.

But in fact, it was Zaytsev who really owned Sohra Group – the Dubai-based company that owned Dynamo. Now, Sohra is listed as Zaytsev’s primary link to the regime.

Through access to the Lukashenko family, Zaytsev has obtained lucrative contracts for his businesses, the sanction implementation decision said. “He is the owner of Sohra Group that is granted the right to export state-owned enterprises’ production (tractors, trucks) to the Gulf and African countries,” it added.

The document pointed to another business that connects Zaytsev and Aleksin: Bremino Group, a company that runs a free economic zone in Belarus and enjoys major tax cuts, as approved by Lukashenko.

“The company has received state support for developing the Bremino-Orsha zone, as well as a number of financial and tax advantages and other benefits,” the documents said, adding that  Zaytsev and other owners of Bremino Group received support from Viktor Lukashenko.

Bremino Group is co-owned by Mikalai Varabei, who was already sanctioned in the previous addition to the blacklist in late in 2020. Bremino Group was listed as Varabei’s primary link to the regime.

Back then, OCCRP emailed the European Commission for clarification as to why only one of the Bremino owners was sanctioned, but no detailed explanation was provided.

These sanctions are only the most recent against the regime amid a crackdown on anti-government activists and protesters after the 2020 presidential election, which saw Lukashenko, according to Belarusian authorities, win by a landslide. Many Western democracies, however, called the elections rigged, and vowed to hold the regime to account.