The United States sanctioned three Bulgarian oligarchs and 64 related entities for their “extensive roles” in corruption, and for “abusing” public institutions for profit, the U.S. Department of Treasury said on Wednesday. 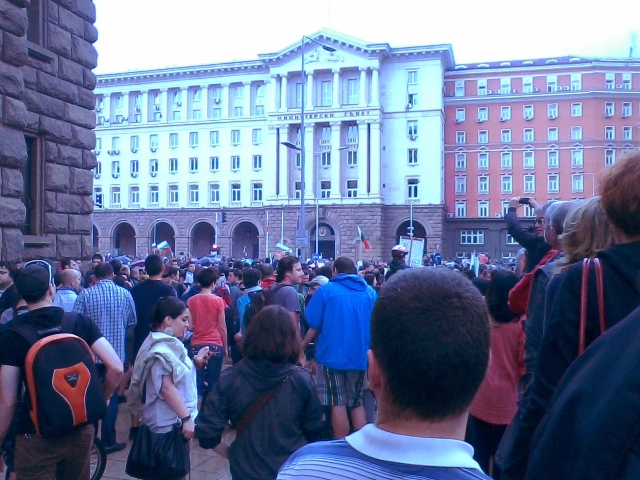 Demonstrators gathered in Sofia in 2013 to protest against Peevski's appoint to DANS, Bulgaria's state security agency. (Photo: Aleksd, Wikimedia, License)The latest designations constitute the “largest Global Magnitsky action taken on a single day in the history of the program” which targets perpetrators of serious human rights abuse and corruption around the world, a Treasury statement announcing the sanctions added.

One of the sanctioned oligarchs is media magnate and former Bulgarian Member of Parliament Deylan Peevski, who has been the subject of several investigations by OCCRP partner and Bulgarian investigative journalism outlet Bivol. One of the stories uncovered his US$700 million offshore empire.

Peevski was found to have “regularly engaged in corruption, using influence peddling and bribes to protect himself from public scrutiny and exert control over key institutions and sectors in Bulgarian society,” the Treasury statement said.

“In September 2019, Peevski actively worked to negatively influence the Bulgarian political process in the October 27, 2019 municipal elections. Peevski negotiated with politicians to provide them with political support and positive media coverage in return for receiving protection from criminal investigations,” it explained.

Also sanctioned is the former deputy chief of Bulgaria’s State Agency for Technical Operations, Ilko Dimitrov Zhelyazkov, who worked as a frontman for Peevski to, among other things, bribe government officials in exchange for information and loyalty.

“Peevski and Zhelyazkov also had an official placed in a leadership position to embezzle funds to them in 2019,” the statement said, adding that “Zhelyazkov also blackmailed a potential Bulgarian government minister with criminal charges from Bulgaria’s Prosecutor General’s office if the minister did not provide him further assistance upon appointment.”

Bulgarian oligarch Vassil Kroumov Bojkov also joins the list for bribing government officials, including an unnamed “current political leader.” He has previously been charged in Bulgaria for “leading an organized crime group, coercion, attempted bribery of an official, and tax evasion,” but in Dubai has managed to evade extradition, despite an international arrest warrant that remains active.

In a separate statement, the U.S. State Department announced more sanctions on five Bulgarian public officials, including Deputy Minister of the Economy Alexandre Manolev who Bivol found abused European Union funds to build a villa used privately by Manolev and his family.

“Today’s actions reaffirm our commitment to supporting rule of law and strengthening democratic institutions in Bulgaria. The United States stands with all Bulgarians whose work drives reforms forward, and the Department will continue to use its authorities to promote accountability for corrupt actors in the region and globally,” the State Department said.