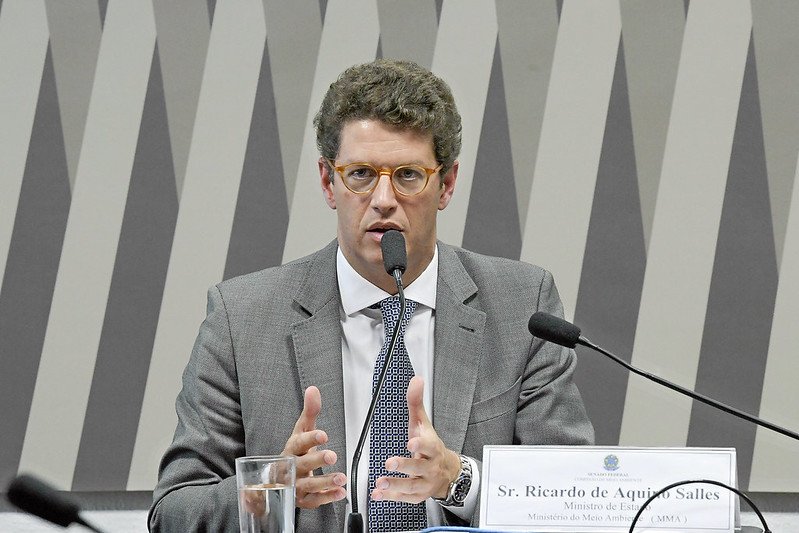 Brazil's Environment Minister Ricardo Salles. (Photo: Roque de Sá, Senado Federal, Flickr, License)The illicit timber exports, which were reportedly backed by Salles and other top officials, enabled some 8,000 shipments of timber harvested in violation of environmental laws and regulations to enter foreign markets that included the U.S. and Europe, whose authorities seized some of the cargo after finding out that it did not have proper documentation.

About 160 federal police officers conducted 35 search and seizure warrants on Wednesday morning throughout the states of Brazil’s Federal District, São Paulo, and Pará as part of what the law enforcement agency dubbed ‘Operation Akuanduba.’ Ten public officials working for the Ministry of the Environment and its regulatory agency, IBAMA, were suspended.

IBAMA’s president, Eduardo Bim, was one of the officials who was ordered to step down, according to a legal decision by Supreme Court Justice Alexandre de Moraes that was made public on Wednesday.

While Environment Minister Ricardo Salles was not amongst the suspended officials, de Moraes’ ruling also granted police access to his personal financial records, and cited “suspicious operations” over the past several years carried out through a law firm that he is a stakeholder in.

Salles denied any wrongdoing when speaking at a press conference and called the operation “exaggerated” and “unnecessary.”

The former lawyer and staunch ally of President Jair Bolsonaro has been nicknamed ‘The Terminator’ by Brazilian climate activists. Since being appointed in 2017, Salles has launched a decisive campaign to remove environmental regulations protecting key areas of the Amazon rainforest in order to grant concessions to the country’s agribusiness industry.

Last year, a video emerged of Salles suggesting that the government take advantage of the coronavirus pandemic in order to further deregulate Brazil’s environmental policies.

“We need to make an effort while we are in this calm moment in terms of press coverage, because they are only talking about COVID, and push through and change all the rules and simplify norms,” Salles said in the video.

Salles has also been the main figure involved in soliciting money from international organizations and foreign governments in order to tackle Brazilian deforestation.

As recently as last month, he requested US$1 billion in financial assistance from the U.S. and European governments in order to improve environmental enforcement and to provide economic incentives to discourage residents from logging in the Amazon.

“What other evidence is needed that this is a government with a clear goal to destroy the Amazon?” Amazon Watch, an NGO, wrote on Twitter following Wednesday’s raids, casting criticism with the fact that Special Presidential Envoy for Climate John Kerry insists that the Bolsonaro administration can be trusted in safeguarding the environment.

The NGO Greenpeace also weighed in, writing that “by enabling environmental crimes and violence against Indigenous Peoples since day one, Brazilian Environment Minister Salles is at the center of Bolsonaro’s anti-environmental agenda, and has done the opposite of what a person in his role should be doing.”