At least 27 people, including a police officer, died in a shootout in northern Rio de Janeiro after security forces entered a favela known to be the headquarters of one of Brazil’s largest criminal groups. 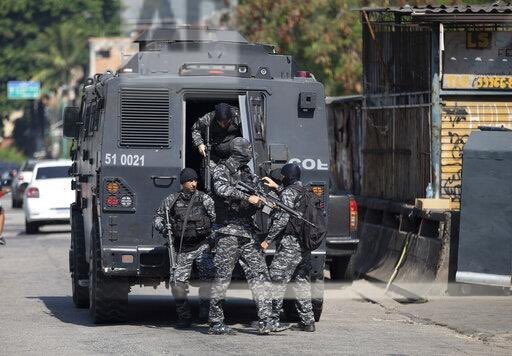 At least 27 people, including a police officer, died in a shootout in northern Rio de Janeiro. (Photo: HRW, Twitter)Rio de Janeiro’s Civil Police corps raided on Thursday the community of Jacarezinho following an investigation by the Child and Teenager Protection Office which suggested that the Comando Vermelho gang was recruiting children to join the organization.

According to local authorities, the group operates through a war-like structure to control drugs and arms trafficking in the northern region of Rio de Janeiro.

The gang reportedly has hundreds of members equipped with military gear and armament, including rifles and grenades, which they allegedly used to repel police actions last week.

Initially, officials said the operation resulted in the killing of 25 people, but authorities confirmed on Saturday that the death toll rose to 27.

Police also revealed the names of the people killed in the operation, including 48-year-old officer André Frías.

The Jacarezinho raid has drawn extensive criticism from local NGOs and the international community as it has become the most lethal police operation in the history of the city.

Despite these public condemnations, Civil Police Chief Allan Turnowski applauded the officers’ performance, saying they showed ‘maturity’ and ‘professionalism’ as they confronted the group.

“Intelligence has already confirmed that all the dead were drug traffickers,” Turnowski said during the defunct officer's funeral.

"The reaction of the bandits was the most brutal recorded in recent times,” Castro said in a video statement on Friday. “Nowhere in the world are the police received with rifles and grenades when they are going to do their job.”

Fachin referred to videos recorded by favela residents shared on social media platforms to expose the excessive use of force.

Civil society groups are also pushing for an impartial investigation into the police proceedings, believing they qualify as police brutality.

“This has been the bloodiest police operation in the history of Rio de Janeiro and the second-largest slaughter nationally,” said local NGO Rede de Observatórios da Segurança, which monitors public security, in astatement addressing the governor.

“Even if the victims were suspected of criminal association, which has not been proven, summary executions of this kind are entirely unjustifiable. The police have the power to arrest but the courts have the duty to prosecute and judge those suspected of committing crimes,” Jurema Werneck, executive director of Amnesty International Brazil, said.