Reporters Without Borders (RSF) urged Russia to “repeal its draconian ‘foreign agents’ law,” stressing that labeling a media outlet in Russia as a “foreign agent” is a “serious violation of media pluralism.” 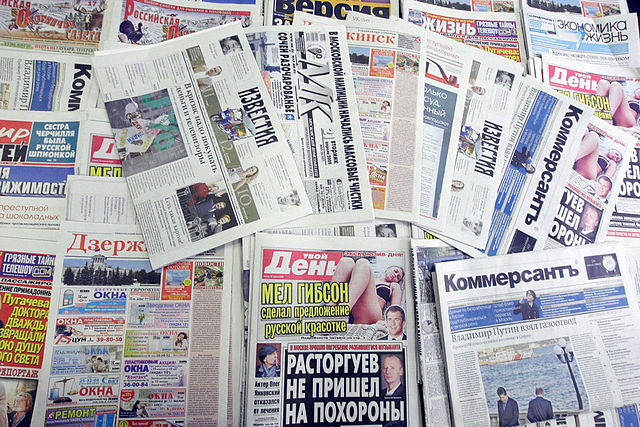 Repression against media in Russia continues. (Photo: Ruslan Krivobok/RIA Novosti, Wikimedia, License)RSF focused on the case of Meduza, a news outlet based in Riga, Latvia, which the Russian Justice Ministry added to its “Register of foreign mass media performing the functions of a foreign agent,” some two weeks ago.

The organization said in its statement on Wednesday that after having found itself on that list, Meduza was forced to “close the bureau and slash salaries.”

The RSF said that Meduza, which is financed through advertisements, claimed it had more than 13 million visitors a month, but that the number significantly dropped and that many advertisers have abandoned the outlet.

Meduza therefore had to close offices in Riga and Moscow, halve staff salaries, discontinue freelancers’ services and launch an appeal for donations.

While the RSF has called on the Russian authorities to abolish the “draconian and defamatory register of ‘foreign agent’ media, which exists solely to enable the government to tighten its grip on the press,” the country’s President, Vladimir Putin, has gone a step further.

He signed last week a new law that forces media which decide to republish content produced by outlets from the Register to point out that the material was produced by a “foreign agent” or face fines of up to 50,000 Russian rubles (US$650).

Marking the World Press Freedom Day on May 3, journalists and NGOs around the world called on Russia to stop suppressing independent media, reminding Moscow that it has signed the European Convention on Human Rights, which guarantees freedom of expression to all citizens as well as the right “to receive and impart information and ideas without interference by public authority and regardless of frontiers.”

They stressed that “Russian independent media, and investigative journalism in particular, is under grave threat.”

“From the very beginning of his presidency, Vladimir Putin has cracked down on independent media through different means: legislative restrictions, change of ownership, fines and criminal charges,” read the document.

Consequently, Russia’s media landscape “is now dominated by outlets controlled by the state or Vladimir Putin’s long-time friends,” it added.