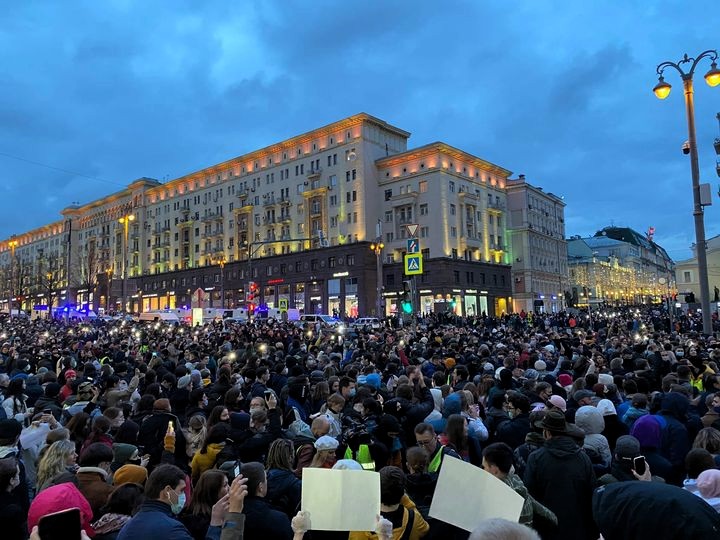 Protests in Moscow in support to top Kremlin critic, Alexei Navalny. (Photo: Konstantin Sonin, Twitter)OVD-Info, which monitors detentions, reported on Thursday that 1,917 protesters had been detained, 824 of them just in Sankt Petersburg, 170 in Ufa, in the Volga Federal District, and the rest in 50 cities all over Russia. The agency reported the arrest of 31 people in Moscow.

Russian police have not offered many details on the arrests, but said that “in cooperation with other law enforcement agencies,” they ensured the protection of public order in downtown Moscow, “where a group of citizens attempted to hold an uncoordinated event.”

Before the protests even started, officers detained Navalny’s spokeswoman Kira Yarmysh. She was almost immediately sentenced to 10 days in jail for “organizing an illegal gathering,” as her lawyer, Veronika Polyakova, revealed.

Yarmish has been under house arrest for 2.5 months and was arrested when she left her apartment during the one hour she is allowed to leave, between 10 and 11 in the morning, according to Polyakova.

Wednesday morning police also detained Team Navalny’s lawyer Lyubov Sobol who said that she was kept her in a police van for several hours and then several hours in the station before she was released.

Authorities claimed that some 6,000 protesters had gathered in Moscow and about 4,500 in Sankt Petersburg, but the head of the regional Navalny Team, Leonid Volkov, said that numbers were at least ten times higher.

Navalny’s Anti-Corruption Foundation (FBK), tweeted that “a sea of people” had hit the streets of Moscow. Alexei’s wife Yulia joined the protests, which encouraged the masses.

Protesters demanded freedom for Navalny, and called on the Russian authorities to “let the doctors in” to help him. The opposition leader’s health seriously deteriorated after almost three weeks of hunger strike.

Alexei Navalny became the target of Russian authorities after he started revealing and publishing reports and documents about corruption in the country’s highest circles. His efforts officials labeled as politically motivated.

Navalny’s arrest beginning of this year prompted numerous reactions around the world. The U.S. and the European Union have already sanctioned a number of Russian officials they see as involved in the Navalny case.

International pressure on Russian authorities continued with the worldwide writers association PEN International writing to Putin, demanding “an end to the political persecution of Alexei Navalny under false pretences.”

The Parliamentary Assembly of the Council of Europe (PACE) has invited the Committee of Ministers on Thursday to “use all the tools at its disposal... to ensure full and prompt execution of the Strasbourg Court’s ruling in the case of Navalny v. Russia, and in particular the immediate release of Navalny.”