Council of Europe Requests Ban on Trade in Torture Tools

The Council of Europe has called on its member states to prohibit the trade and public availability of tools used for torture and the death penalty. 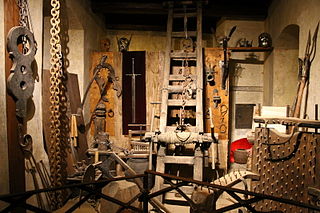 The document calls for legal frameworks to control the flow of goods with have no practical use other than the infliction of the death penalty, torture and other cruel punishment. (Source: Wikimedia Commons)“The Committee is deeply concerned by the fact that certain equipment and goods whose only practical use is for torture can be produced, promoted or marketed in Council of Europe member states, including at European trade fairs or on the websites of European companies and companies based in Europe,” said a CoE statement which accompanied the recommendation adopted last week.

According to the Alliance for Torture Free-Trade, some of the tools openly sold today include spiked batons, shock grabbers and a medielval instrument known as a "shrew's fiddle" which binds the neck and arms into an excruciating position.

The document calls for member states to establish legal frameworks to control the flow of goods “which have no practical use other than the infliction of the death penalty, torture and other cruel, inhuman or degrading treatment or punishment.”

Currently only four countries practice execution by the lethal injection, China, Thailand, Vietnam and the U.S.

The EU had officially banned the export of sodium thiopental, one of the most common lethal injection drugs in 2010, after establishing that exports of the drug to the U.S. were used for no other purpose.

“We welcome this decisive action by the Council of Europe - we cannot end torture without stopping the trade in equipment used to inflict it,” Amnesty International said in a statement which followed the Council’s recommendation.

The group hopes that the recommendations and the national laws which will follow will set a precedent for international agreements or treaties to clamp down on the trade.

“The Council of Europe’s landmark action today provides an important benchmark for states outside Europe, who we hope will be inspired to establish similar controls in their regions,” said Dr Michael Crowley, Research Associate at the Omega Research Foundation, in Amnesty’s statement.