The infamous South African Gupta family had one of its companies sue another over unpaid loans, which prevented authorities from confiscating the sued company's assets allegedly obtained through corruption, documents from a court in Bermuda show. 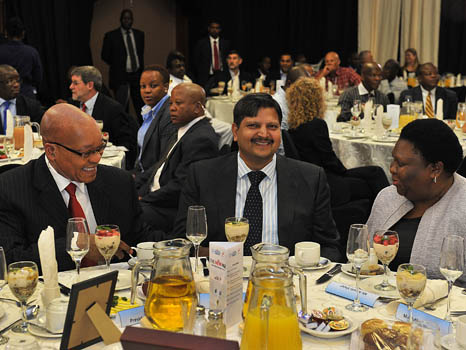 The Gupta family is known for its involvement in state capture - a form of systemic political corruption in which private interests influence a state's decision-making processes. The family’s links extend to South Africa’s former President Jacob Zuma who is on trial for corruption, money laundering and racketeering.

A 2020 court ruling obtained by the OCCRP shows that UAE firm Griffin Line sued Bermuda-based Centaur Ventures LTD (CVL) over an US$98 million loan. In fact, both companies belong either to the Guptas or to their associates, according to emails seen by OCCRP.

According to emails seen by the OCCRP, the Guptas created and used the UAE firm as a money-laundering conduit for CVL, providing fake credit facilities to build legitimate-looking operations.

The court’s ruling determined that CVL must not remove any of its assets in Bermuda valued up to $104 million, as there was a real risk of dissipation that would likely make Griffin Line’s demands go unsatisfied.

An OCCRP investigation revealed in 2019 how the family, now reportedly in Dubai, cycled public funds through a network of 10 shell companies and consulting firms to move the money to India or the UAE.

One of the key mechanisms the Guptas used to launder their money was using intra-company and shareholder loans - and Centaur, a group of family-controlled firms based in Bermuda, played an important role.

Centaur received tens of millions of dollars from Trillian, an investment firm at the center of the Guptas’ web that unlawfully received $41 million from South Africa’s state electricity company.

In addition to cycling the money it had received from state entities, records show that Trillian also moved tens of millions of dollars acquired by other companies in the Guptas’ network in a series of financial transactions that may have been intended to launder the money.

The U.S. government sanctioned three Gupta brothers (Ajay Gupta, Atul Gupta, and Rajesh Gupta) and one of their associates (Salim Essa) in October 2019, accusing them of bribery and overpayments on government contracts to fund political contributions and influence the actions of the South African government.