The US has sanctioned three brothers of the infamous Gupta family and one of their associates, accusing them of bribery and overpayments on government contracts to fund political contributions and influence the actions of the South African government. 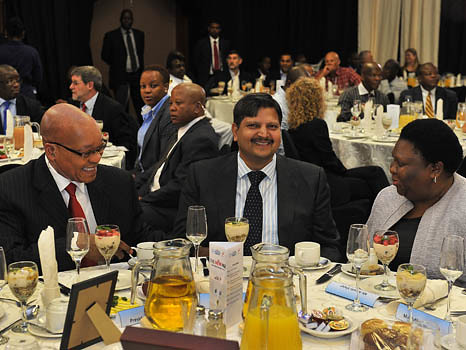 President Jacob Zuma and Atul Gupta at a breakfast in Port Elizabeth. Photo source: South African Government.The Guptas have long been implicated in corrupt political connections and illegal deals that have earned them millions, often in government funds. The influence of the family, now reportedly in exile in Dubai, is so all-pervasive that the affair is widely known as the “state capture scandal.”

In a September investigation, only the most recent in a long series on the Gupta family and its associates, OCCRP detailed how the Guptas and accomplices used their Trillian investment firm and a network of shell companies to launder a fortune’s worth of dirty money.

The sanctions essentially block them and any entities that they own from access to the US financial system.

The release notes Gupta and associates’ corruption in a number of areas, often linked to former South African President Jacob Zuma. Many of the details mentioned in the press release have been described in OCCRP investigations: bribery, illegal deals involving transportation contracts, pension funds, and even diamond purchases with stolen state money.

Under pressure from multiple past investigations and blacklistings, the Guptas have reportedly settled in Dubai after having fled South Africa.