Pope Lashes Out at Mafia in Sunday Prayer

During his traditional public Angelus prayer address on Sunday, Pope Francis spoke out against organized crime and its use of the COVID-19 pandemic to enrich itself. 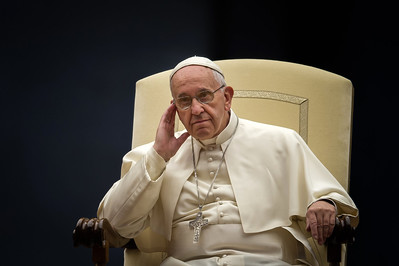 The economic conditions brought on by the pandemic have opened up the country to mafia money laundering. (Photo: Catholic Church England and Wales, Flickr, License)“The mafia are present in various parts of the world and, exploiting the pandemic, they are enriching themselves through corruption,” the Pontiff said. “Saint John Paul II denounced their ‘culture of death,’ and Benedict XVI condemned them as ‘ways of death.’ These structures of sin, mafia structures, contrary to Christ’s Gospel, exchange faith with idolatry.”

The words of the head of the Catholic Church come after a year of the Church’s increased rhetoric against the mafia.

For Christmas last year, the Church named Rosario Livatino, a former mafia prosecutor who was gunned down for his work in the 1990’s, as a martyr, putting him on the road to sainthood.

In September, the Pontifical International Marian Academy, the Vatican's premiere academy for Mariology, the part of Christian theology dealing with the mother of Jesus Christ, established a new department to examine how organized criminal groups use the figure of the Virgin Mary and other trappings of catholicism to further their aims.

“It’s not religion! It’s superstition,” Father Stefano Cecchin, the director of the Marian Academy told Vatican News. The ‘Ndranghetta and other mafia groups use the trappings of Catholicism “to teach the people that God is with them. So they also want to use people’s religious feelings not to lead them to be free, but slaves,” he had said.

The Pope’s focus on how the mafia is using the pandemic is also notable in Italy, where mafia exploitation of the falling economy has been a major concern.

“To launder their money, the mafia is usually happy to invest in failing businesses,” Sergio Nazzaro, a journalist, writer and adviser to the Parliamentary Anti-Mafia Commission, previously told OCCRP.

The economic conditions brought on by the pandemic have opened up the country to mafia money laundering, according to experts.

“The ‘Ndrangheta, the Sicilian mafia and the Camorra exploit the legal economy not only to generate profit, but almost primarily to hide the proceeds of their illegal activities,” Federico Cafiero de Raho, Italy’s national Anti-Mafia and Counterterrorism Public Prosecutor, said at a  round table discussion with Nazzaro.

In Italy the mafia has also been found to have infiltrated the public health system, which has been under heavy load due to the pandemic.

However, amidst all this the country has also embarked on its largest mafia trial since the so-called maxi trials of the 1990s. With more than 350 defendants on trial, the prosecutors are hoping to bring down one of the largest clans of the ‘Ndrangheta, Italy's largest mafia group whose illicit proceeds make up some 5% of Italy’s GDP.