Experts: COVID-19 Has Been a Massive Boon for the Italian Mafia

Some of Italy's leading mafia experts fear that the COVID-19 pandemic has only served to strengthen the mafia’s foothold across Italy, according to a report released by the Global Initiative Against Transnational Organized Crime (GI-TOC). 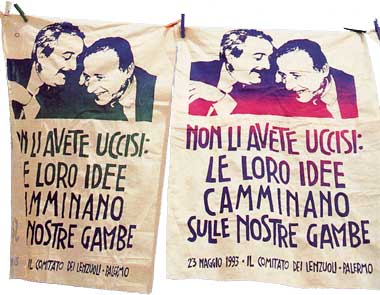 The Italian Mafia has a long history of exploiting times of crisis to gain a foothold in the legal economy. (Source: Wikimedia Commons)The report is based on a virtual round table discussion between police chiefs, the leadership of Italy’s Anti-Mafia Commission and Sergio Nazzaro, a journalist, writer and adviser to the Parliamentary Anti-Mafia Commission, as well as temporary spokesperson for Italy’s Deputy Minister of Health for the duration of the COVID-19 crisis.

The overwhelming consensus was that the healthcare sector and Italy's large proportion of “informal workers,” i.e those who work cash jobs such as manual laborers and service staff, are particularly vulnerable to mafia influence right now.

According to Nazzaro, when the state doesn’t have the power to support struggling businesses it is too often the mafia who steps in.

“To launder their money, the mafia is usually happy to invest in failing businesses,” Nazzaro told OCCRP. “They have so much dirty money they don’t care if they lose a little bit to be able to spend the rest. Now when thousands of businesses are going under and looking to sell, how much worse will it be?”

The Italian mafia is no stranger to exploiting crises and economic downturns. In fact those are the very periods wherein organized crime thrives.

“The ‘Ndrangheta, the Sicilian mafia and the Camorra exploit the legal economy not only to generate profit, but almost primarily to hide the proceeds of their illegal activities,” Federico Cafiero de Raho, Italy’s national Anti-Mafia and Counterterrorism Public Prosecutor, said at the round table.

The pandemic has left the economy ripe for such mafia infiltration.

“For a hotel owner, who does not know if it’s profitable to open again, if it’s safe to open again, if a mafia member comes to him and says I’ll buy your hotel, and not even at a discount, I just need it to clean my money. How could he say no? Why would he take the risk?” Nazzaro, told the OCCRP.

That is why it is so important for robust state relief to counter the spectre of mafia welfare, Nazzaro believes.

“The people who are jobless don’t care about the mafia, corruption or anything, but they see the state only talking, and from the mafia (they see) money, and I fear that at the end of all this we are going to see how much the mafia managed to buy while we were in crisis,” Nazzaro said.

“The fight against the mafia, can’t just be put on the shoulder of law enforcement and the judges. If the state doesn’t offer legal routes for people to live a strong economic life, there will be a gap and as always, the mafia will find its way in,” he concluded.