Police in five countries arrested 52 suspected members of a creative organized criminal group which hid cocaine in terrarium bedding material, hashish and marijuana inside hydromassage bathtubs and even built its own submarine. 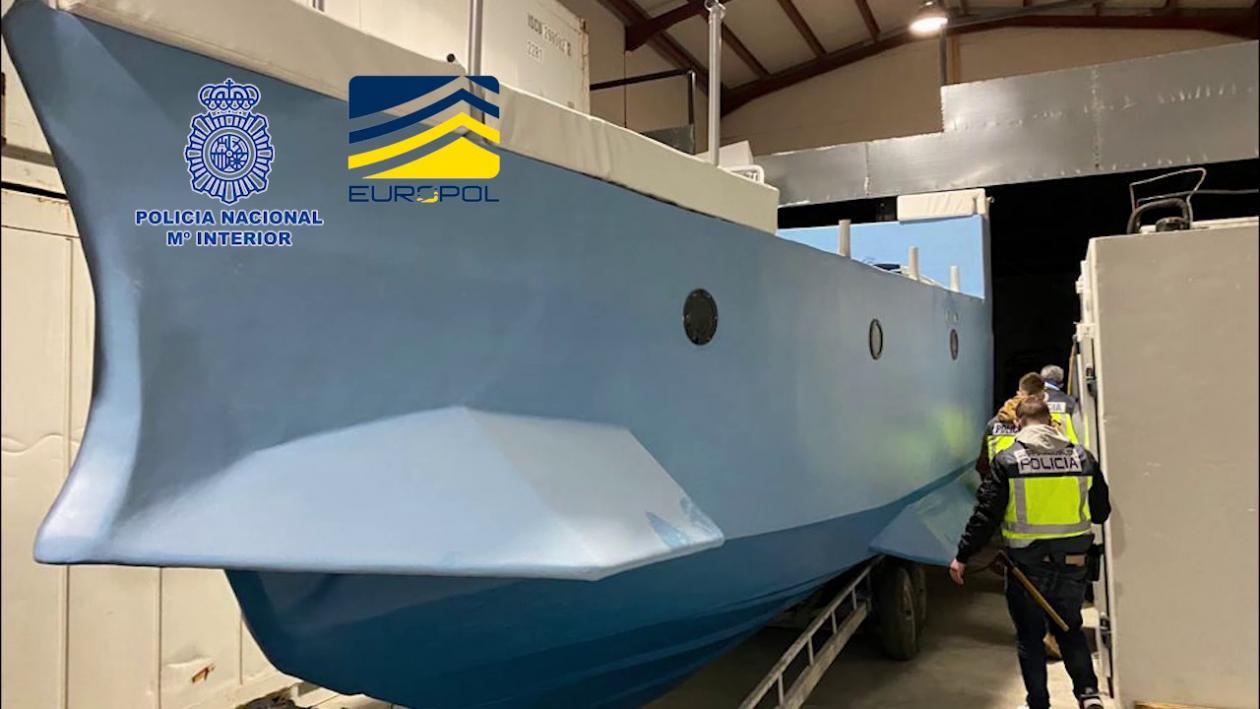 A submarine intended for drug smuggling. (Photo: EUROPOL)During the year-long operation “Ferro,” Spanish National Police said they seized a “narco-submarine,” although the term is somewhat of a misnomer because the vessel, and most others like it, are actually self-propelled semi-submersibles that operate partially under water instead of fully submerged.

The vessel was still under construction when it was discovered. The semi-submersible was handmade with fiberglass panels covering a frame and using two 200 horsepower engines for propulsion, according to the press release.

While Europol and the Spanish Civil Guard both reported the narco-sub to be the first crafted in Europe, experts say there have been at least two prior to the latest seizure.

The first was in 2006 when a fully submersible vessel was found abandoned. Then in August 2020, a boat dubbed the “Ghost Glider” was captured off the coast of Spain, according to Small Wars Journal.

Robert J. Bunker PhD and Director of Research and Analysis at C/O Futures, a consulting firm specializing in non-state actors and military technology, said that in the right circumstances, narco subs are very covert.

“Semi-submersibles sail on the seas and oceans and present a low profile which is hard to detect, especially at night,” Bunker said. “Their heat and acoustic signatures can also be masked. Finding a narco sub in the ocean can, at times be, like finding a needle in a haystack.”

Despite the development of such stealthy transport crafts, one should not expect submarines to entirely replace other trafficking methods. Bunker said that narco traffickers keep their trafficking means diversified.

“From an illicit-economics perspective, a cartel or crime group would want to be able to spread the ‘load risk’ by using multiple smuggling methods rather than just one since if it were countered by the authorities then trafficking routes would be disrupted until a viable work around strategy was developed,” he said.

“The European organized crime groups are increasingly seeing the defensive stealth value of semi-submersible vessels,” he said. “They can be used in tandem with speed boats, limpet containers placed on the bottom of commercial vessels, loads hidden in shipping containers, and other assorted methods.”

The organized criminal group investigated in operation Ferro were not just innovators of transport, they also got creative in hiding narcotics as well.

Authorities discovered in February more than 300 kilos of cocaine hidden in 22 tons of coconut substrate, a material often used for bedding in terrariums. Authorities in Lisbon, Portugal, also seized 100 kilos of hashish and 100 kilos of marijuana hidden inside hydromassage bathtubs as part of the investigation.

The criminal enterprise was found to be using a secret drug lab in Barcelona where authorities found 1200 liters of precursor processing chemicals estimated to produce around 750 kilos of cocaine a month. Authorities presume the group was setting up another laboratory in a warehouse in Murcia for the process of cocaine.

So far, 30 of the 52 people arrested during the investigation have entered prison.