Serbia’s pro-government media launched a coordinated smear campaign against reporters of the investigative outlet KRIK on Tuesday, linking them to a recently arrested crime boss the same reporters investigated and determined to have frequently socialized with the president’s son. 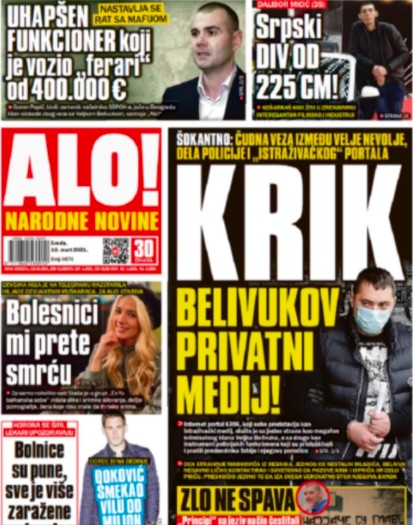 "KRIK - Belivuk's private media," title on a front page of a Serbian tabloid. Other pro-government media reported in a similar manner. (Photo: CDR Europe, twitter)“Many tabloids and television Pink are accusing KRIK of being aligned with Veljko Belivuk, a recently arrested leader of a criminal group, who is currently under investigation for several monstrous murders,” the KRIK team told OCCRP on Wednesday.

Belivuk, aka Velja Nevolja (Velja the Trouble), has been identified as the leader of a fan club of the Belgrade football club Partizan, and is also a member of one of Montenegro’s notorious criminal clans, Kavač.

Through its investigation, KRIK found that the members of Kavač were once aligned with the government and President Aleksandar Vučić’s ruling Serbian Progressive party.

As captured through photos released by Krik, Vučić’s son Danilo, 23, was also seen socializing with the gang’s top members, including Belivuk.

Pro-government tabloids have attempted to paint a different picture, suggesting that KRIK reporters were the ones with connections to the gang. Headlines read that KRIK is “tied to Belivuk,” that KRIK is “Belivuk’s private media,” and that KRIK has been “working with criminals and their associates to endanger President Vučić and his family,” KRIK reporters said.

KRIK warned that the “obnoxious lies are directly affecting the safety of the team,” and that they do not know what to expect next. They did not rule out the possibility of physical attacks or arrests.

“These stories are really worrisome because they put KRIK staff ‘in the game,’” said OCCRP Publisher, Drew Sullivan.

“By accusing our colleagues of being part of the Kavač gang’s criminal activities, these pro-state tabloids are providing criminal groups with justification for murder. We hold Vučić himself responsible for the blatantly false accusations peddled by his mouthpieces, which have real-world ramifications for our journalists,” he stressed in a press release that OCCRP released on Wednesday.

The Independent Journalists' Association of Serbia (NUNS) has also strongly condemned what they described as a “slanderous campaign against KRIK by pro-government media and an attempt to criminalize brave and professional journalists of the investigative outlet.”

NUNS called on the country’s Public Prosecutor to deny “unfounded and dangerous insinuations about KRIK’s alleged connection with criminal groups.”

It also called on the Serbian Interior Ministry to provide protection to KRIK’s team.

Coincidently or not, the campaign was launched right after KRIK published an exclusive interview this weekend revealing how one part of Belivuk’s criminal group was working under control of Novak Nedić, the Secretary General of the Serbian Government and close associate of President Aleksandar Vučić.

Prosecutors, however, have decided not to question Nedić.

“This week’s developments can be seen as revenge and retribution for KRIK's new discoveries and that is why we are calling for support and public reaction to this situation, since we are not talking only about the safety of one journalistic team, but about terrible violations of media freedoms and the collapse of democracy and institutions in Serbia,” KRIK warned.