Former U.S. Secretary of Transportation Elaine Chao has abused the power and the resources of her office to help promote her father’s new book, speed up the process of a work visa, and run personal errands, a report released by the Department of Transportation said. 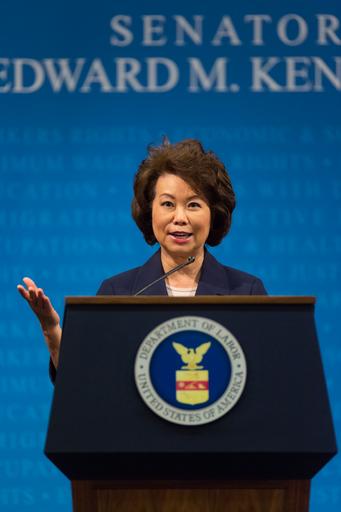 Former U.S. Secretary of Transportation, Elaine Chao. (Photo: snappygoat.com)The report is the result of an investigation conducted by the Department’s Office of the Inspector General. The probe didn’t turn up any results on a Transportation and Infrastructure Committee complaint about favoritism Ms. Chao allegedly showed the state of Kentucky, which is represented by her husband, Mitch McConnell in the Senate.

However it did find examples of abuse of office, including Ms Chao’s plans to bring her father and sister on a later cancelled business trip to China in 2017.

This followed another change in the role in May of 2020 that House Democrats saw as politically motivated and a possible attempt to avoid investigation. The House Oversight and Transportation committees spoke out against the firing of then Inspector General Mitch Behm in a letter to Secretary Chao and Behm’s replacement.

“Any attempt by you or your office to interfere with the Office of Inspector General’s investigation of yourself is illegal and will be thoroughly examined by our Committees,” the letter said.

Emails and proposed itineraries revealed that Ms. Chao arranged for her father and sister, the founder and CEO of the family shipping company, to accompany her to official meetings in China as Secretary o Transportation (SoT). This posed serious ethical concerns because the family’s business, the Foremost Group, does most of its business in China in a sector that could possibly be influenced by the SoT.

Members of the DoT Public Affairs staff were also directed on multiple occasions to provide a media strategy and help promote Chao’s father’s book, Fearless in the Wind.

“For example, in August 2017, the Secretary directed two OST staffers to send a copy of Fearless Against the Wind to a well-known CEO of a major U.S. corporation (which is not regulated by DoT) along with a letter requesting that he write a foreword for the book and a sample foreword,” said the report.

The investigation listed 14 different occasions that took place from the spring of 2017 to the summer of 2018 for which DoT personnel and resources were used for public affairs support. Most of these events honored the SOT’s father and in some way promoted his book.

In response to concerns about the Secretary’s participation in promoting her father’s book and family business, DoT General Counsel Steven Bradbury drafted and released a memorandum which stated that the close relationship and honor that Ms. Chao showed her father and family is linked to “filial piety” in Asian culture.

The memorandum attributed Ms. Chao’s success as Secretary to her experience as an Asian American immigrant and said that separating her success from that of her father and family would discredit the Secretary in the eyes of the international and Asian community.

“Under her leadership, the Department of Transportation acts in accordance with the law, does not compromise on ethics and never puts private interests above the interests of the American people,” the memorandum said.

"Any suggestion to the contrary based on her background and support of her family ignores the diverse cultural fabric and values upon which our country is founded,” it concluded.